If Not The Politicians Themselves, Then I Wonder 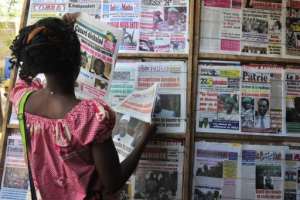 More often than not, the word socialization is used inter-changeably with enculturation. It involves the process by which a child learns or acquires the culture of the society( knowledge, skills, dispositions) into which he is born and becomes a functional member of. My question is; are our politicians' functional members of society, have they become functional members of the constituencies in which they are voted to serve or they have become functional only to themselves, their families and their places of abode? Shall we necessarily ascribe this failure in the nation to them and spare the three key agents of change; the family, the school and the church/mosque?

I would lay much more emphasis on the family, our education system, and the church for not tightening up their belts in bringing them up well. Why do I say this? you may ask. This is because, before a man goes through the developmental process( from 0-18years) his do's and don'ts are shaped by our parents, teachers and pastors or imams. So, when he crosses age 18 he is already an adult to be easily persuaded. Bo Bennett notes that “Those who improve with age embrace the power of personal growth and achievement and begin to replace youth with wisdom, innocence with understanding.” Children in their developmental period are more susceptible and easily influenced while the adult is immune to assuasive teachings. Children improve when the three groups integrate them well into the society and grow in wisdom and understanding.

It peps me up to ask; where are the moral teachings given to them by the families and our churches/ mosques? I don't think one would ever let slid how the Bible teaches us to give more than receiving, how we were taught basically to give honour and respect to each and everyone. In a sharp rebuttal, our politicians rubbish all these good deeds and rather give denigratory words on air. I remember vividly the book of Philippians telling us boldly “Do nothing from selfish ambition or conceit but in humility count others more significant than yourselves.” Just cast your mind around and think of the politician in your constituency, whether he contributes to the development of others or only towards his family members.

Why should you forget these salient teachings from these institutions I tag as agents of change? Wait- is it that our churches are only concerned with their tithing projects leaving the good news unpreached? How could our politicians pave way for truth to linger in the rumours circulating that “ power and wealth sometimes do change the personality of a man.” You need not make this right my Honourable members.

Throughout their lives, education has always become a friend they have lived with. It has built in them the value of appreciation and not only propagandistic criticisms. Our schools have taught them well enough the act of morality right from the first grade; how to talk and talk properly in public and criticize constructively if rulings are falling off the bench. What do we see in our country now? Unhealthy criticism. We are in a country where party members don't criticize the president even if he goes wrong, a nation where no party member sees the bad practice in governance if his party is in power. Where lies the teachings were given to them?. Everything the HEAD does is good in the eyes of party members. The opposition party on the side is even more dangerous and disastrous to the development of mother Ghana. Thus posing unhealthy criticism even if the step taken by the ruling government is a step geared toward national development. This attitude is inimical to our nation's success. Besides all the education they've had, they still stop philanthropists who are affiliated to party A from putting up a developmental project in towns headed by party B. We don't find these things only in our communities, it is also in our educational sector, putting undue pressure on the economy and indirectly the poor.

What's happened to all the worthwhile knowledge, skills and attitude given to them by our schools? My soul bleeds. Meanwhile, there are Reverends, Very/Reverends, Bishops, Apostles, imams, sheikhs and people with all manner of highly acclaimed accolades who are the product of various theological schools among them yet condone ill practices and decisions that wipe out the integrity of the country in a bit and bite. I wonder what these religious leaders preach to their congregants.

Sometimes you should be bold to publicly spell out the wrong things happening at the top as in the case of how some U.S. Republican lawmakers joined their Democratic colleagues in criticizing President Donald Trump for labeling them as "treasonous" and "un-American" in response to the cold reception they gave him during his State of the Union address. This is the armour you ought to wear as politicians.

Although there are people who oppose the fact that politics is a healthy venture, I see it as a sacred call from the Almighty God. A place God has put you to garnish the tattered condition of the deprived. Just as everyone cannot be a pastor, pari passu everyone cannot be a politician too. In the same way, pastors are called to seek the spiritual welfare of their members, politicians are also called to seek the physical wellbeing of people under their jurisdiction.

The question then is: SHOULD WE BLAME THE FAMILY, THE CHURCH/MOSQUE and THE SCHOOL for BRINGING UP SUCH POLITICIANS or THE POLITICIANS THEMSELVES?