Moesha’s lover is being over-charged for the services he is receiving! 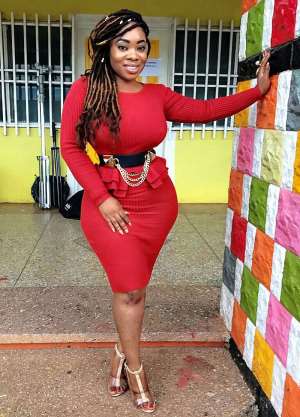 Is Moesha’s lover really getting good value for his money? Is it a fair exchange? Is it a good investment on his part?

Going by Moesha’s CNN interview, this man, whatever he is called, has to pay two years rent on Moesha’s apartment upfront (imagine the cost of an apartment in upscale East Legon), he has bought her a car and also pays for the running of the vehicle, her financials, her everything which I suppose includes all the expensive dresses and shoes she likes to display herself in, visits to the beautician, hospital bills, and the occasional foreign travel.

There are other hidden costs to the man including trying to keep her lover away from the prying eyes of his family and others and ensuring that Moesha does not date other men (married or not). We all know how difficult it is to monitor a woman so this latter cost can be high in emotional terms.

What is Loverboy getting for all this outlay? According to the interview, he will be getting great (?) sex, as and when, he likes. Moesha cannot say NO to sex even if she has the proverbial female headache. Moesha will also minister to his other needs as only a mistress can. If he has problems with his bona fide wife, he can escape the house and find succour in the welcoming arms of Moesha who is available 24 hours. Other non-tangible benefits include the satisfaction of knowing he is dating the hottest girl in town – a girl whose vital stats are the dream of many a Ghanaian man, and the envy of other women (?). But this latter satisfaction will be somehow dented by his inability to parade his hot babe openly. The relationship must, of necessity, remain hidden. Loverboy may be a public figure fearing exposure.

It is my contention that Loverboy’s outlay is far in excess of the returns. Indeed, Loverboy may be paying more than the market rate. There are lots of young and pretty girls in Ghana who will be willing to date married men for half the cost of Moesha’s upkeep but there are not many men in Ghana who have the means to afford a wife and family and still spend so much on a mistress. This is clearly a market in which the supply outstrips the effective demand. I do not know how good Moesha is in bed but I am sure the man can easily get another woman who is equally good or even better! These other girls that come cheaper than Moesha may also have the good sense not to blah-blah about the relationship on local, much less international, television.

No, Moesha’s lover has made a bad deal!
But this is not all there is to this story. For all we know, Moesha may be role playing in her interviews. She may see herself as representing the stereotypical young female Ghanaian high flyer rather than the everyday Ghanaian girl. In the same manner, the lover she describes in the interview may be a composite figure rather than a real blood and flesh man: the typical rich married Ghanaian man who maintains a stable of mistresses.

It is here that the argument becomes a bit theoretical. Moesha, probably, does not have one lover. She may have two or three who, together, contribute to her high life style. Or she may be practising serial monogamy: taking one rich married lover at a time but with a high turnover. The cumulative benefits are what sustain her upper middle class lifestyle. But each of her relationships may be an asymmetrical one in which she is the “degraded” party. The men can come and go and take other mistresses but she cannot. The men can say no to sex but she cannot. She is caught in a contractual situation from which it may be difficult for her to extract herself. Some feminists will say her position is the result of the deleterious effects of patriarchy in which case she is the victim. Others may argue she has rather turned the paradigm on its head: using her girl power to get ahead in a patriarchal society beset by economic problems. Moesha has no qualms about the exchange because she says the man can afford it. Still others may argue that even the man, too, is a victim of patriarchy: having to pay so much for something he could have gotten for free in a more gender equal society.

But one thing is certain. It is Moesha who is now in the public eye. We have not heard of the lover and the discussion has not been about him. He remains hidden. Moesha is not telling on him. She is bearing the brunt of the moral opprobrium alone! Does this make her a victim while the man goes free? Moesha’s inner circle will know this man but they are also not telling. I leave the reader to imagine the consequences of outing this man.

There are other aspects of the Moesha saga that also do not add up. Has she really newly gotten a job? Is it a 9-5 job? The media call her variously “actress”, “model” and “socialite”. But they never mention the movies she has starred or had roles in. We do not read of the agencies for which she has modelled or see her on the catwalk. Acting and modelling are very competitive jobs. But her third job description (socialite) can be the result of success in the first two. As a socialite, she will be on the lists of all party or festival fixers. She is a socialite for parties, not for literary salons. (I wonder if she will sport a #MeToo badge on one of her great boobs at such parties ...)

A few commentators have pointed out Amanpour’s feigned surprise at Moesha’s answers. It is even possible that Moesha may have been told something about the questions and she may have formulated her answers even before the camera started rolling. What other things did she say that were edited out? Have we all fallen victim to some journalistic gimmick?

What next for Moesha? Only she knows. Meanwhile, Loverboy (if he exists) is in the background, soaking it all in and, perhaps, wondering if he has not gotten more than he has bargained for.

Withdraw Your Intimidating Soldiers From Ketu South — Reside...
38 minutes ago