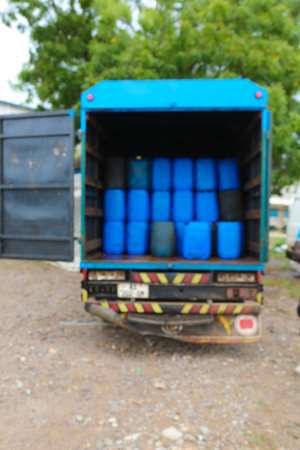 National Security in collaboration with the National Petroleum Authority (NPA) has impounded two trucks suspected to be carrying 300 gallons of fuel estimated at 9000 litres on Monday, 2nd April 2018 at Kpone Landing Beach near Tema around 10pm.

Information picked up from NPA indicated that five persons suspected to be part of a cartel dealing in illegal smuggling of petroleum products have been arrested in connection with the latest oil smuggling scheme.

Two trucks of fuel contain about 300 gallons estimated to be around 9000 litres and two outboard motors were also confiscated by the team after a 7hour operation.

The ringleader Isaac Allotey, 34, with four others including the owner of one of the lifeboats used in the operation, were arrested by a team from National Security who were on a night recce and are currently being investigated.

According to the security officials, Allotey told them he buys each “Kuffour” gallon of fuel at the cost of GHS 80 and sells it at GHS 100, making a profit of GHS 20.

The ringleader narrated that he pays GHS 10,000 in both cash and food items to vessel officials before the products are sold to him.

Undercover security officials who launched the swoop announced the route to the open sea where supertankers anchor sell low-quality gasoline and diesel to the cartel of ‘goro men.’

The underground business involves the smuggling of inferior fuel products from the high seas into the country, which not only causes revenue loss to the government but injurious to human health.

Meanwhile, samples of the confiscated products are expected to undergo laboratory test by NPA officials to authenticate their quality.

The smuggling of petroleum products has been of great concern to the NPA, National Security and the Oil Marketing Companies (OMCs), as it negatively affects government’s revenue and the profit margins of the OMCs.

It would be recalled that officials of the Western Naval Command in Takoradi in the Western Region, in 2017, arrested nine persons and confiscated several vessels suspected to have involved in the use of illegal bunkering.

The arrest was quickened after a warning issued by the Vice President Dr. Mahamadu Bawumia, who renewed government’s commitment to dealing with unscrupulous persons involved in illegal smuggling of petroleum products.