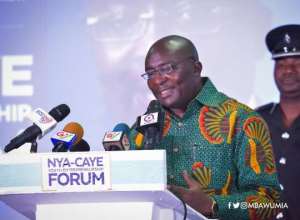 Vice President Dr Mahamudu Bawumia has disclosed that, the Government has begun a conversation to ensure that every single bar of gold leaving the shores of the country is properly weighed, tested, valued and accounted for.

He said it was unacceptable that for a very long time an institution of state with the powers to help mining firms formally account for the mineral resources extracted was not allowed to perform its job, saying; 'this must change'.

To stem the tide in Ghana, he said, the Ghana Chamber of Mines and the Precious Minerals Marketing Company were collaborating in ensuring a spectrum of accountability for the country's mineral resources.

He said the estimated illicit financial flow out of Africa was over US$50 billion dollars annually, noting that, a lot of those illicit outflows occurred in the extractive sectors, which adversely affected the financial position of most rich-resources countries on the Continent.

Vice President Bawumia said this at the opening of a two-day Conference on Moving Ghana Beyond Aid-Revenue Mobilisation, in Accra on Wednesday.

It was organised by the African Centre for Economic Transformation, the International Monetary Fund and the Ministry of Finance, which attracted policy-analysts, financial experts, economists and development partners.

The two-day conference formed part of the African Compact Programme, intended to brainstorm on strategies to boost domestic revenue mobilisation.

Vice President Bawumia said in Ghana, the major mining firms mined from their concessions for export although the law empowered the Precious Minerals Companies to do so.

He expressed worry that some multinational mining firms had been mining for years and failed to declare profits, saying; 'You wonder why it continues mining if it is not profitable, this cannot be right'.

Vice President Bawumia urged governments of rich-resources countries to focus on maintaining their benefits from extractive activities through a combination of royalty profit tax.

In that regard, he said, governments of rich-resource countries should be able to verify mining firms' capital and operational costs, management fees and cost of borrowing in determining profits before tax.

He noted that those costs incurred by the major mining companies 'are in black box' without transparency, which constituted a major revenue loss for many African countries.

Dr Bawumia told the gathering that, if African countries verified those mining costs, it would help them to curb financial outflow from the Continent.

'We keep giving tax exemptions to companies largely in the extractive sectors and we have not taken note of the scale and magnitude of tax exemptions granted and the effect on the tax base.

'We give tax exemptions to companies who keep claiming that they are not making profits but they are taking advantage of those exemptions,' he noted.

The Vice President said government was streaming various tax exemption regimes in the country to target deserving companies, in order to minimise abuses.

Commenting on strategies to ramp up revenue, he said, the Government on assumption of office last year embarked on strategic measures to build a 'soft infrastructure' to ensure the broadening of the tax base.

Those measures included; the rolling out of the National Digital Property Addressing System and the National Identification System to uniquely identify every Ghanaian, while plans was underway to digitise the land registry and titles in October through Land Survey Mapping for easy checking of land title electronically, he stated.

The move, he said, would help state institutions to easily track every Ghanaian through a Tax Identification Number to rope them into the tax net to enhance revenue mobilisation.