Group Pushes For Ban On Shisha, Sale Of Cigarettes To Children 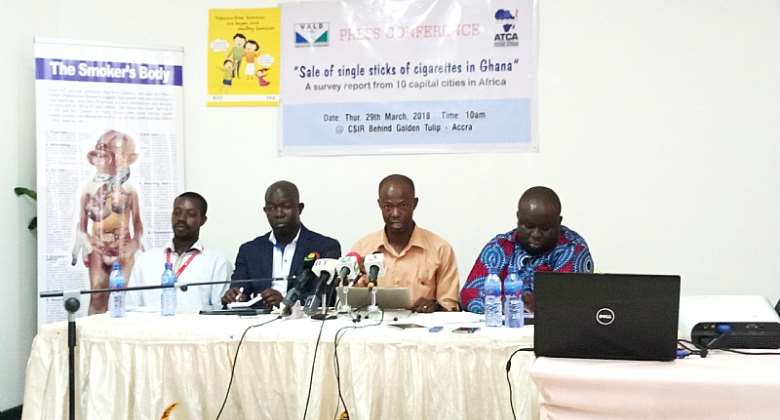 The Vision for Alternative Development (VALD) is calling on the Ministry of Health and FDA in line with Article 16 of the WHO Framework Convention on Tobacco Control (FCTC) and the national tobacco control laws and regulations, to ensure that the sale of single sticks of tobacco product is prohibited with immediate effect.

Speaking at a news conference in Accra, the Programmes Director of VALD, Labram Massawudu Musah said some gaps that have been identified makes it difficult to protect the children and the youth especially from the scourge of tobacco and the tobacco industry.

He indicated that the newest trend is the introduction of shisha/waterpipe tobacco which is being accepted by many of our youth today.

Mr. Musah noted that Shisha is far dangerous than the traditional cigarette and because of the shisha pipes and the water inside, it contributes to the spread of infectious and communicable diseases such as HIV/AIDS, Tuberculosis and hepatitis.

“The Vision for Alternative Development believes that stringent measures are necessary to provide lasting solutions to the problem of selling single sticks of cigarettes to children and exposing them to cigarette in Ghana and Africa,” Mr Musah stated.

According to the Global Youth Tobacco Survey (GYTS) conduct in 2009 in Ghana, 12.5% currently use any tobacco product (Male = 14.1%, Female = 10.6%). It is sad to note that every year more than 3400 of people in Ghana are killed by tobacco-caused diseases, while more than 53,000 children and more than 75,0000 adults continue to use tobacco each day according to the tobacco atlas.

He added that the findings suggested that the availability of single sticks of cigarette allows individuals with few resources, such as the youth and the poor to buy tobacco products.

According to him, the sale of single sticks undermines existing effective tobacco control policies by limiting an individual’s exposure to health warning labels and lessening the impact of tobacco tax increases on cigarette packs.

He added that the sale of single stick cigarette facilitate experimentation among the youth who have not yet become regular smokers. This is one of the major reason why the tobacco industry vehemently opposes sale of cigarettes in a pack of 20 sticks.

Mr Musah noted it also undermines smokers’ efforts to quit. One study conducted in Mexico found that smokers who experience more frequent cravings to smoke because of seeing single cigarettes for sale, are less likely to intend to quit when compared to smokers who do not experience such cues or cravings.

He, in line with Article 13 of the FCTC and the national tobacco control laws and regulations, call on the Ministry of Health and FDA to comprehensively enforce the ban on all forms of tobacco advertising, promotion and sponsorship and this should include any advertising or promotional materials related to single sticks.

Mr Musah urged the authorities to ensure that cigarettes are not sold close to educational institution, hospitals, children playing grounds and places where children are cared for.

He advocated for the authorities to call on the British American Tobacco and their allies to ensure that their retailers do not expose and sell tobacco to children.

Labram Massawudu Musah intimated that one of the measures to aid the achievement of the Sustainable Development Goals is tax on tobacco products which will serve as revenue stream for government and also discourages smoking and initiation.