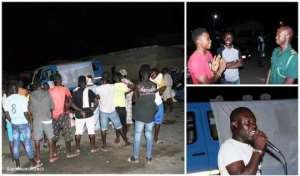 The Research and Counselling Foundation for African Migrants (RECFAM) in partnership with the Ghana Immigration Service (GIS) are running a programme to educate and sensitise the public on the dangers of illegal migration.

The programme which has been running in all the 10 regions has caught the attention of potential migrants, especially the youth who wish to travel outside Ghana for greener pastures.

The sensitisation was organised at Fadama, James town, Madina and Labadi to educate the youth of those communities on the programme and what it entails.

Mr Owusu Brimfou, Assistant Superintendent of the GIS and Head of the Migration and Information Bureau Unit said RECFAM was partnering GIS to fight the crime of illegal travels.

He said the unit was established in 2006 to give legal means to potential migrants who want to travel outside Ghana for greener pastures.

This was as a result of an observation made by the service that Ghanaian citizens were using the deserts to travel irregularly.

Mr Brimfou said Ghanaians who were illegally staying in Libya were crying to the Government of Ghana to rescue them as it was something that could be avoided.

He said Ghanaians who travel through unapproved routes to enter Libya were finding it difficult to even go to the Ghana Embassy in Libya to get their names registered for rescue.

The GIS Assistant Sipritendant said the Anti-human Smuggling and Trafficking Unit officers Desk, have always been intercepting a lot of illegal young female migrants at Aflao, Paga and Elubo boarders travelling to the Gulf regions and they were smuggled into other countries and trafficked and upon getting to the gulf regions their passports were taken from them and then put to slavery.

'The kind of work they are made to do, if they were in Ghana, they would not be doing that. A lot of them are facing hardship and always cry to the service to come and get them back to Ghana.

'They are in hiding and to locating them becomes very difficult, so we collaborate with International Organisation for Migration because they have officers all across the globe'.

He advised them to do away with middle connection men as they were doing damage to the nation.

He said RECFAM was working in six countries, including the United States of America and had been in Ghana since 2004, adding that, 'Apart from the GIS, we are also working with the Network for African Organisation for Migration.'

Dr Binglo said his foundation was working in the various communities around the country with what was called the safe migration clock as an initiative to launch a national migration data collection for Ghana.

This he said would help the foundation to identify recruitment agencies that were willing to work with them and government to reduce the rate of human trafficking and smuggling and rate of applicants of the American Visa Lottery.