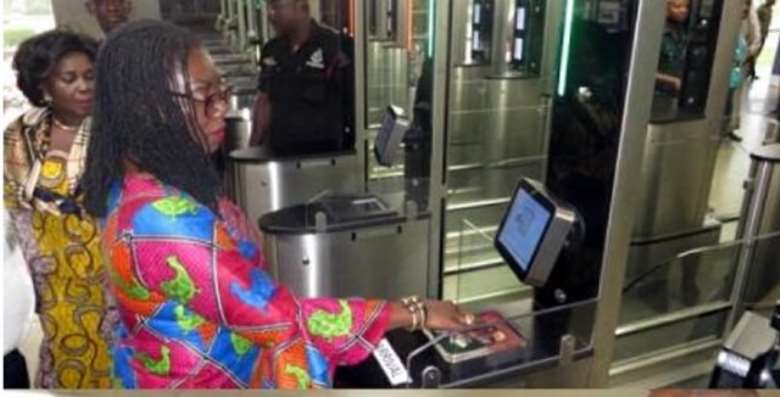 The e-Gates allow travellers to use their passports to automatically enter and exit the country and it would also cater for Registered Traveller Programmes and for regular passenger processing.

This new system would be replacing the PISCES System, which only does identification.

The new system also supports the functionality of border control by performing identification, authentication and verification.

The entire project costs $18 million and is being sponsored by the Communications Ministry.

It covers the KIA, the Ghana Immigration Service (GIS) Headquarters and subsidiary offices, Disaster Recovery, the two seaports at Tema and Takoradi, three land borders at Paga in the Upper East Region, Aflao in the Volta Region and Elubo in the Western Region.

Mrs Owusu-Ekuful said the Communications Ministry was supporting the deployment of the e-Immigration solution as part of the Government’s digitisation agenda and for the GIS enhanced service delivery by facilitating the exchange of information.

She described the e-Gates as a total integrated e-Immigration system that was capable of regulating entry and exit from Ghana.

She said it would provide a case management system to process permits and also meet the current and future needs of the GIS.

“We should, therefore, look forward to an improvement in the quality of service they offer to the public,” she said.

Mrs Owusu-Ekuful said the focus of the e-Immigration system was the provision of an end-to-end integration of border control operations, permit and visa management systems, business processes including document and record management, web-enabled system, improved and efficient information technology infrastructure and interconnection with key stakeholders.

She said it was the expectation of Government that the GIS would make optimum use of new improved Secure Border Management System, specially developed for Ghana that conforms to global standards and completely migrates from the present PISCE System.

“I entreat all the stakeholders to engage in extensive public education to enable the public to avail themselves of this innovation,” she said.

She commended other institutions, which were collaborating in the execution of the project namely the Ministry of the Interior, the Ministry of Aviation, the GIS, the Ghana Airports Company Limited (GACL), the Ghana Civil Aviation Authority and the contractors (Gemalto, Josanti and Dart Company).

Mrs Cecilia Dapaah, the Minister of Aviation, said: “We are particularly elated that this thing is now being commissioned to start work. We all want to see people go through a seamless arrival process; thus they would go and sell Ghana out.”

She said the project was part of the process to lessen the hustle of travelling adding that it was in line with government's vision to ensure efficiency at the KIA.

Mr John Dekyem Attafuah, the Managing Director, GACL, said the inauguration of the project was a major milestone in the history of the aviation industry in Ghana.

“It is our hope that the GIS would let this service operate efficiently,” he added.

Mr Eric Afari, the Deputy Commissioner of GIS, said: “It is our desire and hope that this gate will be put to good use so that it will have the full benefit for Ghana.”

“We believe that after this inauguration, Ghanaians would be encouraged to enrol so that we take about 57 per cent of all the travellers who come here to the e-Gate and then free the rest of the electronic booths for the non-Ghanaians,” he added.

He said the overall effect would be to reduce the processing time and make it stress-free at the KIA.