Witchcraft and Diseases, Reality or Myth 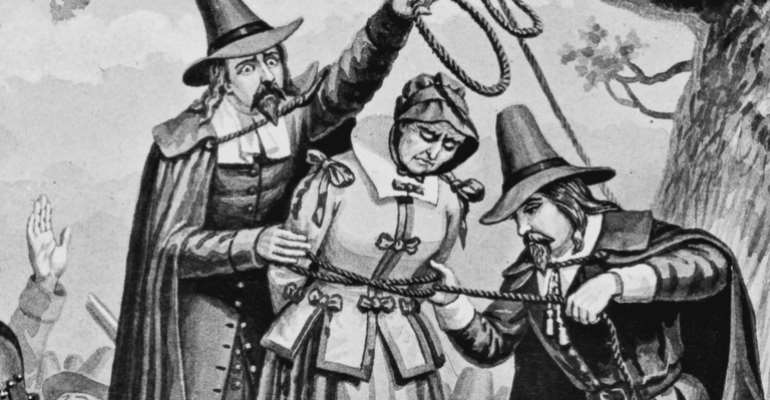 WITCHCRAFT, AND DISEASES, MYTH OR REALITY?
In January 1692, at Salem (present day Danvers, Massachusetts, USA)2 girls, aged 9 and 11 years accidentally, had what now appears as ergot poisoning. (Ergot fungus are parasites that grow on ears of cereals and forage plants.) They started vomiting, had muscle spasm and delusions.

Their doctor, could not figure out what was happening. He finally, gave a diagnosis of "Bewitchment".

Both girls, accused Tituba, (Rev Parris' slave and originally from Barbados), and 2 other very poor women as witches. At a court hearing, Tituba confessed, but the 2 other women, Sarah Osborn and Sarah Good denied their guilt.

Tituba mentioned other people as co-witches. They were jailed.

As inexplicable diseases afflicted the community, other witches began to confess and named still, others.

Bridget Bishop, (an apple farmer and more reclusive), was the first person from Salem, to be convicted as a witch and hanged on June 10, 1692.

In Salem alone, within the spate of 3-4 months, 18 other witches, followed Bridget Bishop to the "Salem gallows", and over 150 others were jailed.

After a year of witch trials, public opinion shifted, and in May 1693, a judge, pardoned and released the imprisoned witches.

The Massachusetts general court, deemed the witch-trials unlawful and compensated the families of affected witches in 1711.

Alse Young was the first person to be executed in America, for witchcraft on May 26th 1647. She was hanged at a meeting house square in Hartford (now the site of the old state house), Connecticut. For the next 22 years, 46 people were accused of witchcraft in Connecticut, with 11 of them being put to early death, for the crime.

In 1730, as witch-mania died down, laws were passed to help protect people from being wrongfully accused and convicted.

WITCHCRAFT IN EUROPE
In Europe, during the 17th century, superstitious beliefs were ripe and the invention of demonology, by the church fueled the belief in witchcrafts. The church had often quoted Exodus 22:18, "Thou shall not suffer a witch to live", to persecute European witches.

Later, in the 18th century, as Europeans became more enlightened through modern education, together with the church, itself reforming their opinions, the superstitious belief in witchcraft died.

The law, making witchcraft punishable by death, was repealed by the British parliament in 1736.

WITCHCRAFT IN MEXICO
Mexicans believe that illness results from sin, and witchcraft.

Belief in witchcraft is widespread in Mexico, and every year, in March, witchcraft practitioners, meet at a delegates' conference in Catemaco, in the south of the state of Veracruz

About 90% of people in Mexico are Catholics
Witches in Mexico hover around and in the sky, as fireballs.

WITCHCRAFT IN GHANA,
Modus Operandi.
Witches have their meeting places, where they regularly come together. The place is physical one, like under, or around large trees, like the oak tree, or at garbage landfills and flat/plain areas, like soccer/football fields.

During the night, witches leave their bodies behind and fly out as, birds, owls, animals and insects to places of their gatherings. Witches procure their victims, in sequence. Victims are usually, close family members.

Fireballs are the hallmarks of ongoing witchcraft activity. Witches suck the blood (life force) and spiritually, eat internal organs of their victims. Physically, the victim will fall sick and eventually succumb to their illnesses and die.

Witchcraft may be inherited at birth or gifted by dying relative or, occasionally acquired, unconsciously by eating menu containing seeds for witchcraft or drinking a concoction.

Apart from causing deaths, both sudden (including deaths from car crashes) and delayed deaths, witches are blamed for causing chronic diseases like: Sickle cell anemia, diabetes, epilepsy, stroke and even HIV.

Let us refresh our memories on each of these diseases.

SICKLE CELL DISEASE:
Sickle cell disease occurs, when both parents have hemoglobin-AS (Hgb-AS). For each pregnancy, the child has 25% chance of having Hgb-SS, the sickle cell disease. The child shall grow to have recurrent bone pain and anemia. Public opinion pointed to witchcraft for causing the recurring pain.

There was once, a boy at a local middle school, who was always getting sick, with bone pain. The term for that disease condition was "rheumatism". The boy's classmates got fed-up and, one Friday after school hours, decided en bloc, to go to this boy's home to hoot at (and register their disapproval of) the boy's grandma bewitching activities. That boy was living with the grandma, alone.

EPILEPSY:
Epilepsy may be due to a neurotransmitter imbalance, or abnormal neuronal transmission, in the brain, as a result of a focal brain pathology, like vascular anomaly, brain tumor, brain injury, and infections. Any abnormalities that disturb the normal pattern of neuronal activity, leads to abnormal sensory and motor activities, including multiple seizures and loss of consciousness.

DIABETES:
Diabetes is related to an imbalance between pancreatic insulin production and the body's insulin requirements. For the average adult, excess fat in the body, is associative. For young persons, immunological assault on the pancreas may be a cause.

STROKE:
Stroke is related to long-term inability to control, blood pressure, cholesterol and diabetes which damage the brain blood vessels and eventually lead to termination of blood supply to parts of the brain.

HIV/AIDS:
HIV is a viral infection, transmitted through sex and contaminated blood products. The infection leads to breakdown of the affected person's natural immunity.

Of course, scientists now, know about the causes and prevention of such diseases. The knowledge has not been fully embraced by our culture.

With the high prevalence in the belief of witchcraft, there could be potential delay in seeking appropriate help and medical interventions, when one gets ill.

Modern Christianity, has not helped to curtail the inherent Ghanaian fear of witches and their need for protection from witchcraft. Some churches pray for the deliverance of church members, from demons, witches and other principalities. Such church activities are very popular as with Ghanaians, as they were with Europeans, and New Englanders, in the 17th century.

Pastors, Prophets, have helped to propagate the belief in witchcraft for the survival of their businesses. They have, gradually replaced the soothsayers and witch doctors.

I remember a pastor who, once, had accused my late grandmother of causing asthma in a young relative. My grandmother had donated a fowl, to the kid on Christmas day. The pastor explained, it was through the gift that the child was bewitched with asthma.

WHY HAS WITCHCRAFT BEEN SO POPULAR IN GHANA?
90% of Ghanaians and more, believe witchcraft to be real.

Religious institutions have fueled and propagated the belief in demons and witches, both representatives of the devil on earth.

Ephesians 6:12 has often been quoted by Pentecostal churches to support the belief in witches and demons.

Religious leaders have placed fear of demons into the minds of their followers, and people rush to them, when apparently threatened by evil powers. "Pastor, please pray for me".

The church has the habit of talking down to Traditional Spiritual Practitioners. Fetishes, and Ancestral worshippers are labeled Heathens, Pagans and Satanic.

Any group that practices esoteric knowledge is quickly labeled: occult, and Devilish.

Members of the non-denominational group, Freemasons, have not been spared of verbal abuses and wrong labeling

Where is Our Self-Empowerment?
We have a culture, that believes in the outside powers, rather than inner power;

A culture that is eager to shift blame, from ourselves to others. C K Mann's music lyric: "M'abusuafo mp3 m'asem, Wo de galon asi me yem emu" typifies this inclination. A drunkard accusing the witches in his family for placing alcohol container in his belly, leading to his alcohol addiction.

We never set aside a quite-time for ourselves to reflect, contemplate and ask why we have afflictions.

The easiest choice has always been: Blame another person, usually the poor old lady in the family.

Any strange and mysterious disease shall be given spiritual connotations and opens the doors for Pastors, Prophets and Fetishes to exhibit their prowess.

There was a story of an elderly female, found sitting on top of a roof, recently. The conclusion was that this person was a witch who had been overpowered by a stronger force, while flying. The question, I would like to ask proponents of this theory is, since when did witches fly in their total bodily forms, or maybe, as the witch was trapped, she was able to teleport her body from her home to the site she was trapped.

Belief in Witchcrafts, shall die a natural death, but very, slowly (maybe not in our lifetime). This may happen when:

1.) We stop propagating belief in witchcrafts to our children, (and the up and coming generations). "A Lie Told Often Enough Becomes the Truth"

2.) We gain more direct knowledge and understanding about etiologies of certain afflictions, diseases and behaviors.

3.) We gain insight into the psychological principles of witchdoctors, pastors and prophets.

4.) We unlearn the belief systems, handed to us from childhood and start doing our inner engineering and gain more insight about the spirit worlds. Meditation is the first step.

We are spiritual beings, in earthly bodies.
Remember! No other human, be that person a Witch, Pastor, Doctor, Parent, Child, has more spiritual powers, than yourself. It is all in the mind. Whatever one believes eventually materializes. As the saying goes: "What you see is what you get" It is time to reawaken the dormant spiritual power in us. It is time to take personal responsibilities for ourselves and stop blaming witches and wizards for our morbidities.

What took Europeans and New Englanders 50-100 years to overcome, should not take 500 years (and more) for us to achieve similar feats.

Alex Sarkodie,MBChB has over 30 years experience in the field of Medicine