Ghana At 61: What Are We Celebrating? 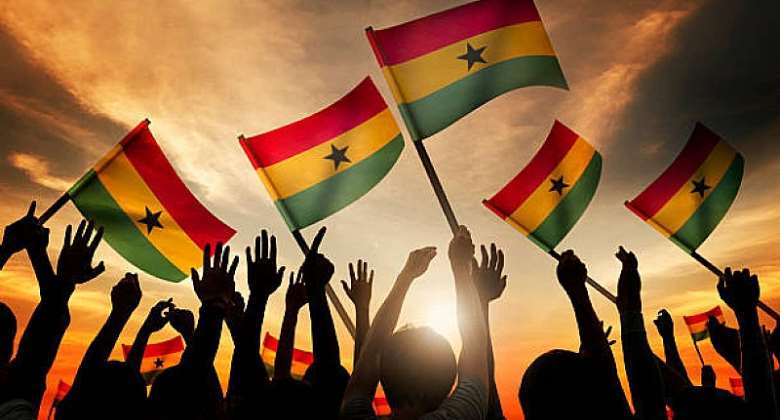 It has been a while my catchy ball point pen flows on national issues. I could guess that my gallant readers have anticipated to reading from my blog, some new publications on the treading issues emanating on daily basis in the country. I am sorry keeping you anticipating for such a long time. I have for some time now been engrossed with academic issues as the semester commenced.

In actual fact, I wish I could remain mute on this topic because I felt it is late and that much has been said about it by some of my colleagues in the inky fraternity. Unfortunately, I continue to experience sleepless night, day in day out. I feel uneasy on daily basis when this topic comes to mine. This has left me no options than to carefully lace my well selected words together to drum home my views to justifiably justify why I think it is an absolute misplaced of priority celebrating Ghana at sixty-one (61).

Before I set forth to advance my argument, I would want to draw your attention to the stand I took on this whole celebration. I am not totally against the celebration of the independence day since I believe in the axiom, "a country which does not honour its heroes is not worth dying for".

That notwithstanding, it is within every reason to advance my argument that our heroes are totally unhappy about the preposterous celebration of the freedom they gallantly and bravely fought for with their lives. The freedom has now become too expensive that the purpose of it is completely defeated. I don't think our forefathers fought for this freedom for just the shake of it but rather for Ghanaians to be liberated from all forms of slavery and suppression. As we speak today, how many of us can boast of being liberated totally from suppression? The question I keep asking is that is Ghana truly an independent country? Probably it is independent by mouth. Or better still, it is an independent in documents which is practically impossible. Ghana, the seemingly independent country, has only freedom of speech, freedom of worship, partial freedom of movement to boast of. Is that the true definition of independent? What about the economic freedom, social freedom, inter alia?

Indeed, I am not unaware of the fact that development is a growing concern but if we sincerely gained independence for sixty-one (61) solid years now, then why do our leaders still travel to our former colony to seek quality health care? Why do they enroll their children in schools outside Ghana? Do we have schools here and if yes why don't their wards attend the same schools with the ordinary Ghanaian children? These are serious questions that demand thoughtful, uncompromising, educated response from our leaders. Let's stop making mockery at ourself as a country. Our leaders must stop making Mother Ghana a laughing stalk on open camera to the rest of the countries.

Godly speaking, it is very disheartening, embarrassing and painful that our leaders are unable to think outside the box at this 21st century. It is indeed worrying to successfully waste millions of Ghana cedis in the name of celebrating independence day every year without having anything to point to and a significant add up to the legacies left behind by our cherish heroes. Yet we claim to be the beacon and an epitome of Africa. This is rather an epitomic index case of national disgrace. What is more embarrassing than this? Every year we see our "big men and women" shamelessly seated comfortably and the president being saluted by the poor and hungry looking students, market women, security personnel, kaayayee, seamstresses, actors and actresses just to mention a few. Meanwhile, majority of the students use blocks and wood as chairs and tables to sit and write in class. Most of these students still sit under trees or sheds to learn. Majority of them cross rivers and streams with multitude of them losing their lives in the pursuit of education. What a pity! Shame unto our leaders.

The sixty-first (61st) independent day celebration in 2018 was no exception of the usual shameless display of what I do not know which name would best suit it, I should say ignorance or unintelligibility or mediocrity? At sixty-one, majority of children still die of malaria, sixty-one years of independence, most of our people in the communities still share drinking water with pigs, cows, sheep, goats and other animals. Sixty-one years of independence, we still have our cities' gutters being choked by filth. A sixty-one year old country is still engulfed by these fundermental challenges yet it has not occurred to any of our leaders to rethink and act like president John Magufuli, "The Bulldozer" of Tanzania. On 24th November, 2015 John Magufuli took a wise decision which was surprising to the whole world. He cancelled the celebration of their independence day and ordered that the day be used for clean-up campaign so that cholera that was claiming the lives of multitude of their people could be curtailed. He said, "It would be "shameful" to spend huge sums of money on the celebrations when "our people are dying of cholera". His decision sincerely shocked the whole world but that was the best way to celebrate their independence day at the time. As I speak now, the cholera of Tanzania is tantamount to the filth, insecurity, unemployment, child labour, armed robbery, schools under trees, child mortality among others in Ghana. Tanzania's situation wasn't different from what Ghana is going through now yet we continue to tow the line we have been towing though all is not well with us. As if we are under a curse of low thinking capacity. I have carefully and deeply tried to actually figure out the exact improvements we have been able to make on where our forefathers stopped but only to realize a complete disappointment by our leaders. Frankly speaking, the progress of Ghana as a developing country does not commensurate our maturity. We have greatly retrogressed comparing the developmental strides our forefathers made in this country at that time.

Ghana's independence day, aside the usual display of the weeks rehearsed matching prowess which are usually mastered by the poor students and security personnel after successfully wasting a number of productive days for rehearsals and the president usual display of his equally rehearsed trademark rhetoric speech, has no value added to our lives on the independence days celebration. I can say without any shroud of doubt that the day has largely been denigrated to only mark as a festival without carefully pointing out any significant socio-political lessons from the event and the legacies of the brain behind it. I am most at times left with no reason than to think that our leaders are greedily using the occasion to enrich themselves at the detriment of the ordinary Ghanaian. Yes, you have every right to disagree but do that with a clean conscience. Having disagreed with me, could you then explain to me why celebrating this day becomes a patronizing catalyzer to our leaders than the provision of basic amenities? Ghana at sixty-one yet our members of Parliament think that it is prudent for them to deliberately block the chances of the ordinary Ghanaian sons and daughters from getting access to the law school so that only their (Parliamentarians) sons and daughters and that of the judges will have access to the Ghana School of Law. Greed at its highest peak. This is unfortunate! Very pathetic! In fact, the existence of the gross mismatch between the country's development and its age is an issue of great concern. It behooves the 21st Ghanaian leaders to undergo a revolution in values and culture, where such revolution must be anchored in Ghanaian tradition in order to overcome this weird incongruous unthinkable behaviour. In fact, we must rise against the entrenched decay of our status quo to prove our worth as critical thinking beings if we indeed want to exonerate ourself from being a classic study case of national disgrace.

Of course others may vehemently disagree with me but that is my opinion and I don't have problems with you expressing yours. I must reiterate that I am not oblivious of the significance of the independence day celebration, I only wish that educational fora are organized to properly and carefully walk the young ones through the history of the country we are living in. It will surprise you to note that most of the students celebrate this day without knowing anything else beside, 6th March, 1957, the day Ghana became independent. So if that is the case, why do we then continue to waste resources on it instead of celebrating it in a way that will minimize cost?

Statistics, according to Citi FM, indicates that 5.6million Ghana cedis was spent on the celebration of the independence day in 2016. This money could be used to provide better health facilities to some deprived communities in the country. It is indeed an acknowledged fact that Ghana is lacking behind its peers in terms of growth and development. This, the president categorically affirmed in his speech in paragraph twenty (20), "Fellow Ghanaians, on this our sixty-first anniversary of our independence, it is important to remind ourselves that, around the time of our independence, we had peers such as Malaysia, South Korea and Singapore. Our per capita incomes were very similar at around four hundred and fifty United States dollars ($450) in 1960, and our economies were dependent on the production of primary commodities. Today, these countries, once our peers, have significantly transformed themselves into industrialised economies. Income per head in Singapore is now at fifty one thousand, four hundred and thirty one United States dollars ($51,431), South Korea at twenty nine thousand, one hundred and fifteen United States dollars ($29,115), and Malaysia at nine thousand, six hundred and twenty three United States dollars ($9,623) compared to Ghana's at one thousand, one hundred and fifty two United States dollars ($1,512). We are still dependent on the export of primary commodities, as was the case at the time of Gordon Guggisberg. We must admit, sadly, that, in the area of economic development, we have underachieved, relative to our peers at independence".

Having attained sixty-one years of independence, social vices have been the patronizing catalyzer in the country by the youth. Where therefore lies the future of the country? Corruption has also been deeply rooted and has become so difficult to uproot. We must bow our heads in shame. Mother Ghana is calling for a total attitudinal change among every nook and crany across all levels. If I were the president of Ghana, I would have organized educational fora across the length and breadth of this country to educate Ghanaians on the need to demonstrate patriotism and also educate and sensitize citizens more especially the youth, on the urgent need for serious attitudinal change for a better Ghana.