How Araraume Taught Okorocha To Be Godly But Okorocha Refused 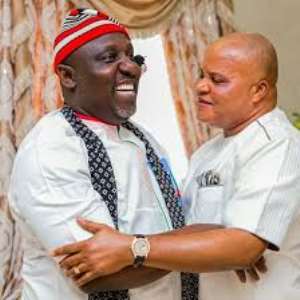 Chief Rochas Okorocha, the indefatigable rambling Imo State governor has a new agenda he wants to introduce in the state since Senator Ifeanyi Araraume indicated his interest for the governorship race of the state come 2019: Hatred.

The governor who believes and has said that Araraume is not ‘Godly’ and cannot govern Imo State, has shown himself as the rightful person that lacks spiritual knowledge and the fear of God.

This is odiferous in the carriage with which Okorocha who thinks that he dines with God and is a family member of the Jehovahs, showcases himself in keeping malice and playing politics of acrimony, deceit and self-conceit.

These qualities, without a doubt, run in Okorocha’s blood like a virus and may be seen as his trademark. If not, one wonders why he would believe that Araraume would not earn his support and he would decide who Imo governor becomes in 2019 or not

The bad displeasure governor had shown his ungodly manners not only to Araraume but to many too numerous to mention. For instance, the Agbasos of Emekuku, near Owerri, will never forget the double tongue they earned from Okorocha after he deceived their son, Jude, to become his deputy.

Jude Agbaso was later hounded out of office through some spurious, thrumpeted and kangaroo allegations. This happened after Okorocha had ‘swore’ before Chief Martin Agbaso, in the latter’s palatable compound at Emekuku, saying that Jude would go far with him in governance.

The raging Okorocha did that to earn the support of Martin, yet knowing deeply in his heart that he would not go far with Jude in the Imo politics. And this is what happened!

Many know Okorocha as a man who cannot be relied on when it comes to politics and Araraume perhaps knew about this peculiarity of the effusive Imo governor yet he loved him.

In the event of the 2015 elections in Imo State, Araraume directed his supporters to vote for Okorocha while believing that his action would be for Imo interest, oblivious that Okorocha would be an accident that many had thought would not happen in governance.

Araraume who was and has always been influential in the Nigerian politics gave the APC victory in Imo in the outcome of the April 11 2015 guber election. Araraume delivered APC in the six local governments of Okigwe zone, where Araraume comes from.

The Araraume whom Okorocha wants the world to believe today that has no fear of God, the latter presented glowing tributes of the former when he put the APC in the lead with over 79,000 votes.

“I want to tell you that I have seen a true man of integrity, a true great son of Imo State who came out to support me and the APC in the governorship elections without asking for a kobo,” Okorocha told the world after the 2015 guber election. “All he asked for is that the interest of his supporters and Imo people be protected. That man is Senator Araraume.”

This is the quintessential Araraume: A man whom many believe in that can put his head, not only leg, in a matter he so much believes in. Araraume so much believed in Okorocha, whom the Imo residents are suffering from the wound of the disaster that Okorocha has festered in the state today.

In the same year while in a church service at the Government House Chapel, Owerri, Okorocha was occupied of praises for Araraume. In short, Okorocha so much praised Araraume for the support he showed him, as a major determinant reason he won at the elections. If Araraume had no meek and amiable heart, he would not have supported Okorocha even when he was in another party, pre-election of 2015, other than the APC which produced Okorocha.

Let us not also say that Okorocha is a chronic liar and deceiver who can do anything as a (godly person he wants the world to believe he is) just to get political power. And Araraume supported him to gain that political power and today, he is using it to inflict mayhem on Araraume.

Let us say that Okorocha is not ashamed of the malnutrition, hunger-related deaths, joblessness and food insecurity that have characterised Imo State sine seven years he has been in power. Instead of him to show remorse that Araraume is not the problem of Imo State, Okorocha concentrates on his long-term policies of blame game, over conceit, the unfortunate glowing tribute of the disgraced and resigned ex-president of South Africa, Jacob Zuma.

The insult which Okorocha is giving to Araraume today is unwarranted. But like Araraume would say to the rambling Okorocha, “It is only God who arrogates power, nobody can decide the fate of another; if you do that you will only be challenging your God. My destiny is in no man’s hand but God in 2019.”