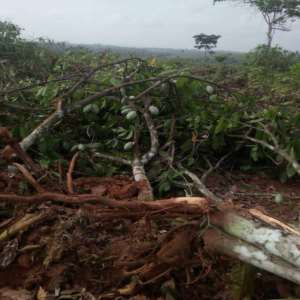 Some cocoa communities in the Eastern Region have been hit with food insecurity after farms were destroyed to make way for rubber plantations.

Food prices have skyrocketed and a lot of such communities which hitherto fed themselves are now food insecure.

At Asikasu, a farming community in the Eastern Region, cocoa output has dropped by more than 50 percent over the last two years following the destruction of cocoa farmers.

The Ghana Rubber Estates Limited (GREL) is claiming ownership of large tracts of lands and have allegedly been responsible for the destructions. The farmers are not happy.

“Now when you look at the destroyed lands, its more than 2000 hectares of farms that have been destroyed. Half of that is cocoa,” James Mensah a farmer in the community told Joy News’ Joseph Opoku Gakpo for Hotline Documentary Plastic Chocolate.

One of the affected farmers, 63-year-old Dawutey, whose five-acre cocoa farm was destroyed said the destruction of his 30-year-old farm has left him with no property to hand over to his children and grandchildren. “I am in trouble now. What will I do?” he quizzed.

Secretary of the Asikasu Odumase Cocoa Life farmers association Emmanuel Nordzoh claims plans are underway to cut down a lot more cocoa trees in the area.

He says GREL acquired the lands from a disputed chief although the farmers had legally leased the land from the true chief and the contract is yet to expire. 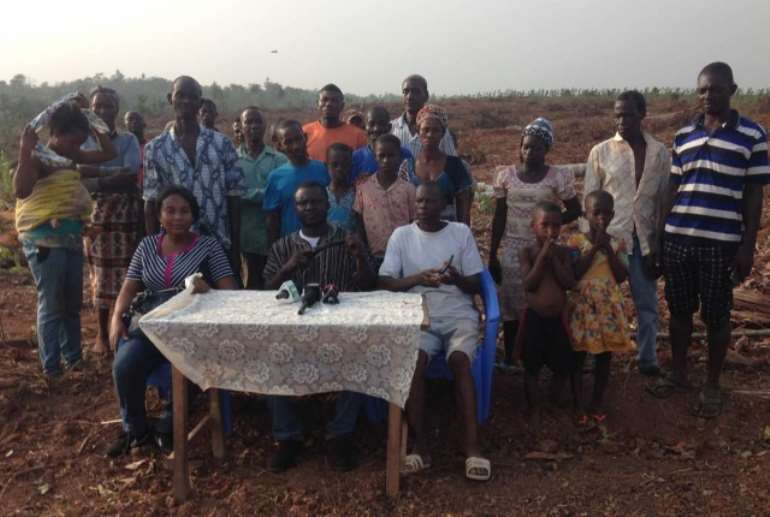 Usually, because cocoa trees yield pods seasonally, farmers would plant food crops between their fields. They rely on this to feed their families until the cocoa harvest season is due. Growing rubber on the field would not allow the farmers to plant food crops in between because it sucks virtually all the nutrients in the soil, and also because of a pungent smell, it emits during harvest.

As a result of this, one of the chieftaincy claimants Barima Kwabena Tanoh says the community is in trouble. “Now there is hunger at Asikasu. The destruction of the cocoa trees also led to the destruction of food crops. The youth have all left and so there is no one to farm,” he said.

“At first when you buy cassava 2 cedis, you and your family of five will be satisfied. But now, you will spend more than 10 cedis before you will be ok. They destroyed cocoa, palm oil, coconut, plantain and other crops,” he explained.

The secretary of the cocoa farmers’ association is convinced the rubber production will not benefit the community as much as they have benefitted from cocoa. 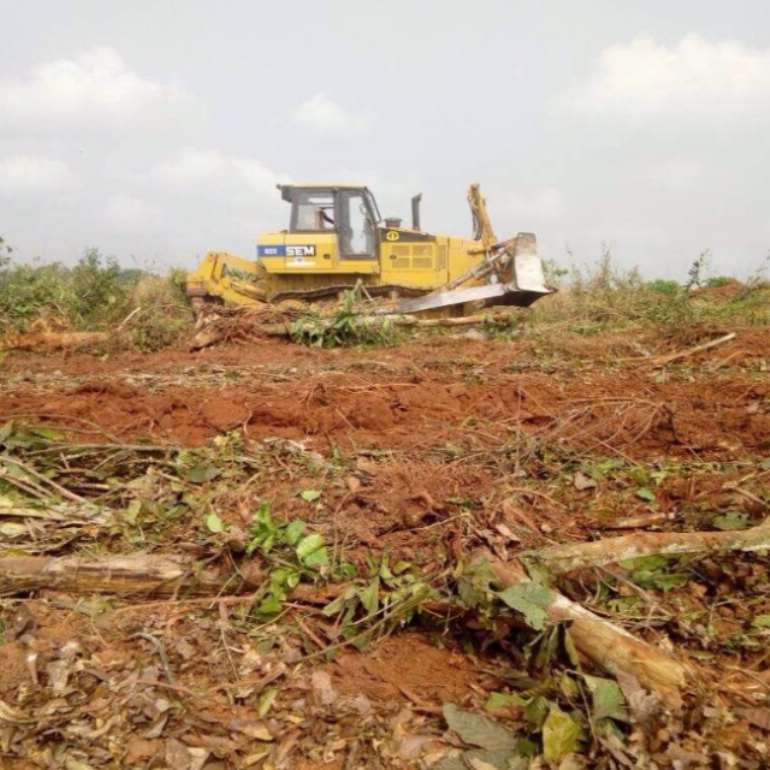 “There will be more poverty because farming is already a difficult occupation and if your farm of so many years is destroyed, then you don’t have a future… It’s very pathetic and we don’t like it,” Emmanuel Nordzoh said.

The story is same at Asiam in the Ayensua North District of the Eastern Region. “They have seized the lands from us without compensation and destroyed the cocoa. So we are suffering. We want out lands back,” Abena Adobea said.

The Ghana Rubber Estate Limited insists it is not on a deliberate campaign to destroy cocoa farms. The company insists it has acquired hundreds of thousands of hectares of land from traditional leaders in the areas to undertake large-scale rubber plantations and some of the cocoa trees happen to be cited on the land which would have to make way.

GREL was established in 1967 as a joint venture company with Firestone Tyre Company of USA to develop rubber plantations. GREL became wholly state-owned in 1980 when Firestone sold its shares in GREL to the Ghana Government.

However, government entered into a financing agreement with the French government to revive the company in 1996, after which French management company, Societe Internationale d Plantation d’ Hevea (SIPH) became the major shareholder of the company. The company has maintained its innocence on the accusation.