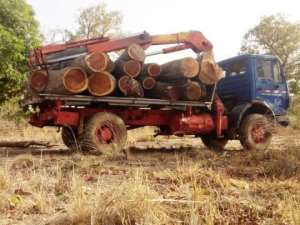 Rosewood loggers in Upper West have entered their way into the Wechiau Community Hippo Sanctuary to cut down trees causing mass destruction to the much loved tourist site and keeping away sightseers.

The Sanctuary is a unique community-based project, protecting and preserving the wildlife and the environment of designated parts of the Black Volta River in the Region.

The River is home to one of the two remaining hippopotamus populations in the country and was turned into a Sanctuary by local chiefs in 1999.

Since then, the project has had chalked success in providing Ghanaian and International tourists with a unique and unusual eco-travel experience.

But, in recent years, authorities say, the Sanctuary located in the Wa West District has been invaded by both legal and illegal loggers in search of precious wood locally called "Bunyie Daari".

Community members have also raised concern about the wanton destruction of the tourists' hub and the environment alike, and demanded swift interventions to stem the tide.

Mr R.Y. Abdulai Issahaku, the Manager of Wechiau Hippo sanctuary, told the Ghana New Agency during a visit that members of some 17 communities in the Wa West District pledged to protect and preserve the environment against all sort of degradation including bush burning and logging.

However, GNA checks reveal that the practice of illegal felling of the precious rosewoods has become a norm as one could visibly see stumps of felled trees and cars waiting to cart the logs away.

Mr Musah Abdulia, spokesperson for the Youth of Tokali, who also doubles as the Youth Chief, expressed frustration regarding the practice, saying: 'The youth don't benefit a penny from the rosewood harvest.'

'We are not happy with the illegal felling of trees within our community but we don't have the strength to stop the perpetrators from the act,' he said adding 'we never negotiated anything with the perpetrators of the act, they come and start logging the trees till their time elapses and then they depart from the area, that's all we know.'