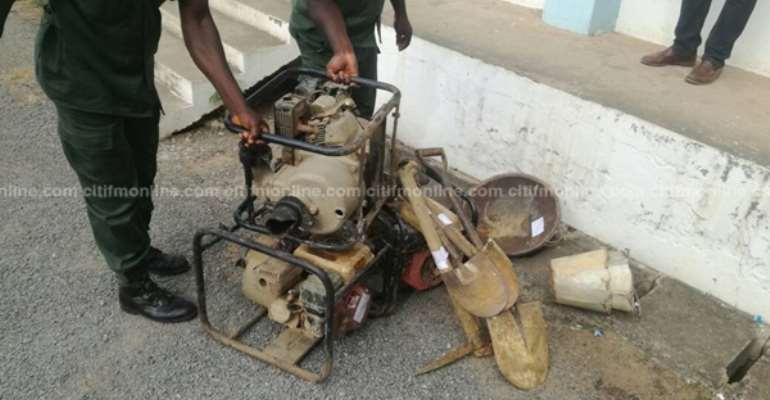 A Koforidua Circuit Court B has remanded into prison custody four persons who were arrested for mining illegally at Bomaa near Kwabeng in the Atewa District of the Eastern Region.

The suspects; a 17-year-old student Oscar Lartey; a 25-year-old driver, Dampah, a 29-year-old miner, Logo Kwabena and Kofi Asomaning, a 38-year-old farmer, were busily mining in the Atewa Forest Reserve when they were arrested.

The suspects pleaded not guilty to conspiracy to commit crime to wit mining and mining without a license, and were remanded into prison custody by her Ladyship Mercy Addea-Kotei.

They will reappear in court on March 8, 2018.
The Anyinam Range Manager of the Forest Service Division of the Forestry Commission, Palmer Aikens, who led the arrest of the miners retrieved 2 mining buckets, two head pans, a washing carpet, shovels, one pickaxe, gold dust, three pumping machines and food items such as rice, tinned tomatoes, onions and cooking utensil.

The Assistant Manager in charge of the range, Palmer Aikens, expressed worry about the continuous illegal mining activities in forest reserves despite the nationwide ban on small scale mining.

He also appealed to chiefs and opinion leaders to commit themselves to the fight against illegal mining.