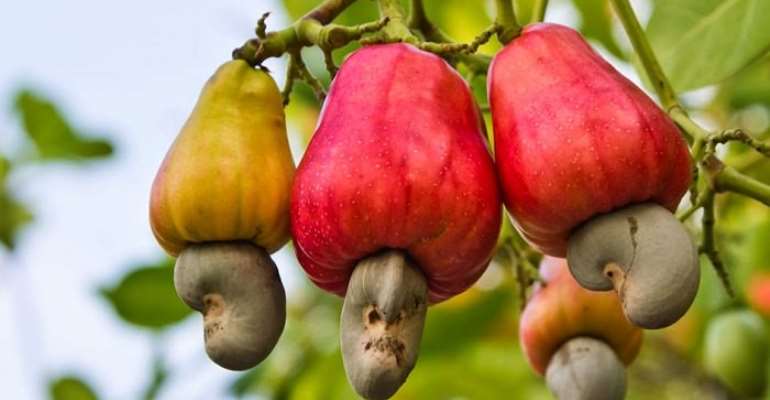 In fulfilment of yet another campaign promise, President Akufo-Addo has launched the Cashew 10-year Development Plan and the 2018 Cashew Season Opening Day at Wenchi in the Brong Ahafo Region.

The launching ceremony, which was well attended by cashew farmers from various parts of the Brong Ahafo Region and beyond, chiefs and a host of dignitaries, followed the kick-off of the first-ever Cashew Mass Spraying Exercise, which was also out-doored in Wenchi in December last.

The Brong Ahafo region was chosen for the launch because of the large number of cashew farmers spread across about fourteen districts, providing jobs to over 13 thousand people who, on the average, produce 55,000 metric tons of raw cashew nuts annually.

The overall vision of the Cashew Development Plan is to aggressively expand, modernize and transform Ghana’s cashew sector into a significant foreign exchange earner, creating jobs and substantial wealth for Ghanaians while enhancing the environment to reduce global warming.

In that regard, the government is focusing more attention on the development of other cash crops such as coffee, oil-palm, rubber and cotton which have the potential to rake in more revenue and create millions of jobs in the agricultural value chain.

The President noted that Ghana currently lagged behind countries such as Nigeria and Cote d’Ivoire in the production of cashew and stressed the need for Ghana to double her efforts at improving on the production capacities of cashew farmers to generate the much needed income and jobs.

Touching on the Planting for Food and Jobs programme, President Akufo-Addo said, government would expand the scope of the programme to cover 500,000 farmers this year following the success story of campaign last year.

The Minister of Trade and Industry, Alan Kyeremanteng, said the Cashew Development Plan fell within the government’s long-term vision of diversifying the country’s economy which has mainly been dependent on Cocoa for about a hundred years.

“Today, the government is making a major statement about the diversification of the country’s economy. We are also making a statement about our commitment towards job creation and also providing opportunities for our farmers to increase their income levels”, Mr. Alan Kyeremanteng stated.

For his part, the CEO of the Ghana Exports Promotions Authority (GEPA), Gifty Kekeli Klenam, said her outfit had released GH.c1.5 million to the Cashew Industry Association of Ghana (CIAG) for the pilot mass spraying of cashew farms in six districts of the Brong Ahafo region to control pest infestation and production and supply of one million cashew grafted seedlings.

“GEPA under my leadership has adopted a new approach to developing and promoting the exports in Ghana by focusing on the entire value chain of priority products that are known to have the potential to increase the country’s exports thus reinforcing our firm strategic commitment of developing the cashew industry to promote sustainable growth…..”, she stressed.

Madam Klenam announced that the third Tuesday of February each year would be marked as Cashew Season Day to “usher in the season at the beginning of each cashew season.”

Speaking on behalf of the cashew farmers, Executive Secretary of the Cashew Industry Association of Ghana (CIAG), Aaron Achiaw, expressed concern about the activities of nomadic herdsmen and hunters as major threats to cashew farming.

He, therefore, appealed to chiefs and land-owners to find a lasting solution to the problem to guarantee a sustainable and attractive cashew industry in future.

He was grateful to President Akufo-Addo for “being the first President in the history of Ghana to have shown such an interest in the development of the cashew industry” and expressed the readiness of members of his association to collaborate with government to make the implementation of the Cashew 10-Year Development Plan a success.

Kafaba Lynching: I Was Possessed – Woman 'Killer' Reveals In...
1 hour ago

Nitiwul Challenges Mahama For Evidence Over Suppression Of N...
1 hour ago