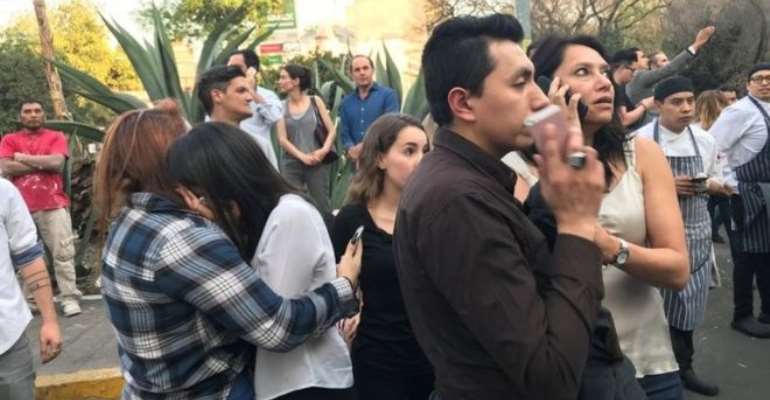 A 7.2-magnitude earthquake has hit south-western Mexico, causing buildings to shake in the capital Mexico City, about 350km (217 miles) away.

The epicentre of the powerful tremor was near Pinotepa de Don Luis in Oaxaca state, the US Geological Survey said.

Friday’s quake was 24.6km underground. Some buildings were damaged in Oaxaca, but no deaths were reported.

A helicopter carrying the interior minister and Oaxaca’s governor crashed in the state, killing two people.

Interior Minister Alfonso Navarrete and Governor Alejandro Murat were not seriously injured, officials said. They were surveying the damage caused by the quake.

The Pacific Tsunami Warning Center said that there was no tsunami threat.

After the tremor, thousands of people were seen fleeing buildings in Mexico City as the ground shook.

Some were crying, while others hugged each other on the streets of the capital. Traffic stopped for a few minutes.

“Since 19 September we haven’t been that scared,” said shoemaker Luis Rodríguez in Mexico City.

But another woman said: “It is very scary to think your house can fall over you any second.”

There were clouds of dust near buildings already damaged by the September quakes.

Mexico is one of the most seismically active regions in the world, sitting on top of three of the Earth’s largest tectonic plates – the North American, Cocos and Pacific plates.