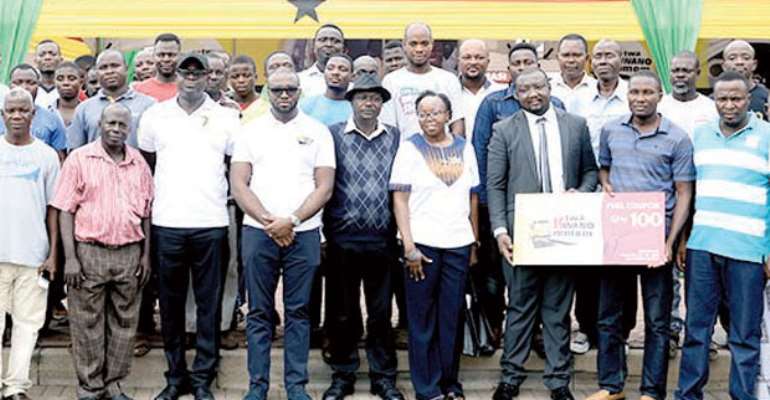 The participants after the programme

Speaking at the closing ceremony of the 5th edition of Twa Kwan no Mmom, the company's annual behavioral campaign held at the Achimota Bus Terminal, they applauded the programme for helping to highlight and inculcate responsible drinking among drivers.

Akwasi Amankwah, a driver who shared his experience, said he used to drink and drive at some point but through the educative sessions conducted by the University of Ghana Medical School, he has turned a new leaf and stays dry during working hours.

Kofi Bentum, a driver, who has taken part in the past four editions, commended Guinness Ghana for the programme, which has aided a lot of his colleagues with the information to make the right choices.

The National Road Safety Commission (NRSC), represented by Kwame Kodua Atuahene, Communications Manager, commended GGBL for the steps taken over the years to reduce drink driving and alcohol related accidents in the country.

“It is noteworthy to find a company which produces alcoholic beverages taking the initiative and proactive steps to discourage drink driving and committing resources over the years to tackle the issue among commercial drivers in Ghana,” he noted.

Speaking at the closing ceremony to climax this year's campaign, Gabriel Opoku-Asare, Corporate Relations Director at GGBL, said the company is committed to partnering stakeholders in the road safety space to ensure safety on Ghana's roads.

“During the six-week campaign period, we worked with the Police MTTD to enforce the legal drink-driving limits. A total of 27,226 breathalyzer tests were conducted on commercial drivers at eight major bus terminals in the Greater Accra, Ashanti and Central Regions,” he said.

He called on drivers to make a conscious effort to stay dry while driving so as to reduce road accidents and injuries attributed to driving under influence, adding “throughout the campaign, we recorded impressive behavioral change and compliance by drivers. This, we believe, is as a result of the continuous education conducted for drivers at the bus terminals.”

The NRSC, Street Sense Organization, management of the Achimota bus terminal and a cross-section of drivers took part in the closing ceremony.