For global water crisis, climate may be the last straw 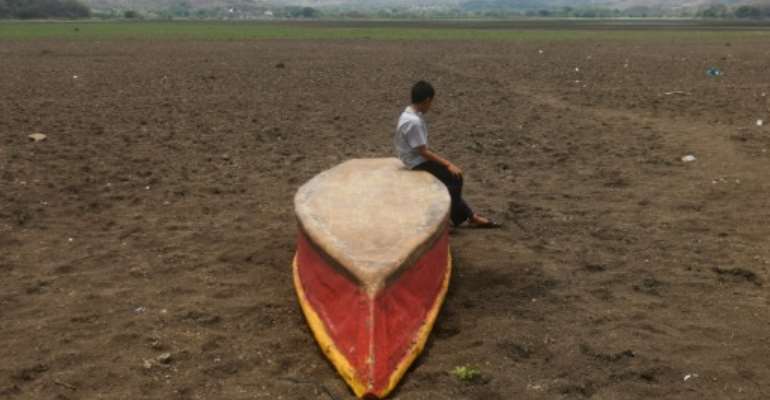 Waiting for the rain: Scientific scenarios predict that as a rule of thumb, dry regions will become drier and wet regions become wetter when climate change goes into higher gear. By Marvin RECINOS (AFP)

Before man-made climate change kicked in -- and well before "Day Zero" in Cape Town, where taps may run dry in early May -- the global water crisis was upon us.

In some countries, major rivers -- diverted, dammed or over-exploited -- no longer reach the sea. Aquifers millennia in the making are being sucked dry. Pollution in many forms is tainting water above ground and below.

Cape Town, though, was not especially beset by any of these problems. Indeed, in 2014 the half-dozen reservoirs that served the South African city's four million people brimmed with rainwater.

But that was before a record-breaking, three-year, once-every-three-centuries drought reduced them to a quarter capacity or less.

Today, Capetonians are restricted to 50 litres a day (13.2 US gallons) -- less than runs down the drain when the average American takes a shower.

Climate scientists foretold trouble, but it arrived ahead of schedule, said Helen Zille, premier of the Western Cape province.

"Climate change was to have hit us in 2025," she told a local news outlet.

"The South Africa Weather Services have told me that their models don't work any more."

Worldwide, the water crises hydra has been quietly growing for decades.

Since 2015, the World Economic Forum's annual Global Risk Report has consistently ranked "water crises" as among the global threats with the greatest potential impact -- above natural disasters, mass migration and cyberattacks.

"Across the densely-populated Indo-Gangetic Plain" -- home to more than 600 million people in India, Pakistan and Bangladesh -- "groundwater is being pumped out at an unsustainable and terrifying rate," said Graham Cogley, a professor emeritus at Trent University in Ontario Canada.

More than half the water in the same basin is undrinkable and unusable for irrigation due to elevated salt and arsenic levels, according to a recent study.

Groundwater provides drinking water to at least half of humanity, and accounts for more than 40 percent of water used for irrigation.

But underground aquifers do not fill up swiftly, as a reservoir does after a heavy rain. Their spongy rock can take centuries to fully recharge, which makes them a non-renewable resource on a human timescale.

As a result, many of the world's regions have passed the threshold that Peter Gleick, president-emeritus of the Pacific Institute and author of "The World's Water," has called "peak water".

"Today people live in places where we are effectively using all the available renewable water, or, even worse, living on borrowed time by overpumping non-renewable ground water," he told AFP.

Exhausted groundwater supplies also cause land to subside, and allow -- in coastal regions -- saltwater to seep into the water table.

Dozens of mega-cities, rich and poor, are sinking: Jakarta, Mexico City, Tokyo and dozens of cities in China, including Tianjin, Beijing and Shanghai have all dropped by a couple of metres over the last century.

"Half a billion people in the world face severe scarcity all year round," said Arjen Hoekstra, a water management expert at the University of Twente in the Netherlands.

"Global warming comes on top of all this," said Hoekstra.

For each degree of global warming, about seven percent of the world's population -- half-a-billion people -- will have 20 percent less freshwater, the UN's climate science panel has concluded.

By 2030, the world will face a 40-percent water deficit if climate change continues unchecked.

Glaciers in the Himalayas and Andes upon which half-a-billion people depend are rapidly retreating.

The new normal? People in the Cape Town suburb of St. James queue to collect drinking water from pipes fed by an underground spring

At the same time, global water demand is projected to increase 55 percent by mid-century, mainly driven by the growth of cities in developing countries.

For Gleick, global warming is already a threat multiplier.

So far, Earth's surface temperature has risen by one degree Celsius (1.8 degrees Fahrenheit), and the odds of meeting the UN goal of capping the rise at "well under" 2 C lengthen each year. Global warming alters wind and humidity, in turn affecting rainfall patterns.

California has just emerged from a five-year drought, the worst on record. In 2014-15, Sao Paulo's 12 million souls came close to its own "Day Zero". Beijing, New Delhi, Mexico City and Las Vegas are among other cities that have been facing "huge water supply risks for more than a decade", noted Hoekstra.

When climate change really kicks in, large swathes of Africa -- the Sahel, along with its southern and western regions -- will be especially vulnerable.

Currently, only five percent of the continent's agriculture is irrigated, leaving its population highly vulnerable to shifting weather patterns.

Two-thirds of Africans could be living under water stress within a decade, according to the World Water Council.

Forecast drawdown from dams in the coming months as Cape Town faces a water crisis.

For Cape Town, drought conditions may be a taste of things to come.

"Our new normal, at least when it comes to rainfall, is that the chance of dry years increases as we go forward toward the end of the century, and the chance of wet years decreases," said Piotr Wolski, a hydro-climatologist at the University of Cape Town who had compiled data going back more than a century.