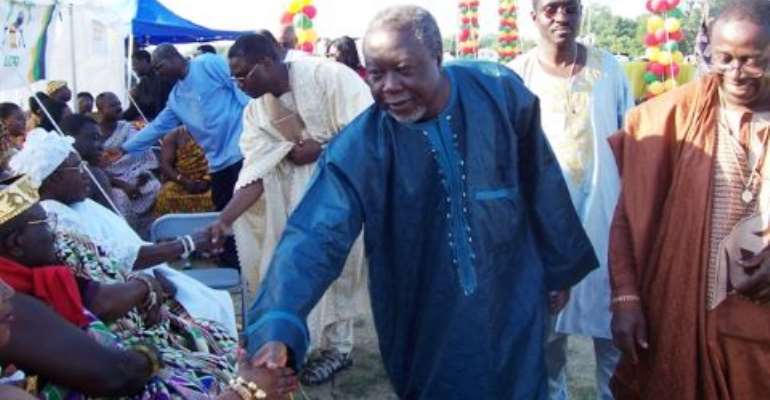 A Platform To Promote Diplomacy! Says H. E. Fritz Poku.
"Certainly I am pleasantly surprised about the organizational ability of the Ghana National Council of Metropolitan Chicago"-Ambassador Poku.
The biggest and the most well attended Ghanaian cultural event, Ghanafest proved once again that it is an event not to be missed. The event was attended by over ten thousand people from all races and cultures across the globe. It was so exciting, moving and with the feeling of unity as some Americans came to the festival wearing African attire to show their solidarity and also demonstrating the fact that they are also "representing" as a group. Some of them were noticed by H.E. Fritz Kwabena Poku who called and greeted them. Many of the attendees travel to Ghana frequently whether on vacation, exchange program or on a mission to make a difference. It is one nation with different cultures. Gone are the days when others never understood our culture but with unity and diplomacy, the culture has become noticeable.
H.E. Fritz Opoku's presence had a great impact on the festival as many attendees were excited to see a top government official in their midst to celebrate Ghanafest. In an exclusive interview with Ghanaweb, H. E. Fritz Opoku said he was invited to be the Guest of Honour and felt it was in his capacity as Ghana's Ambassador to the US to be able to show his physical presence at the occasion in order to encourage and also advise Ghanaians and Africans in the Diaspora. Mr. Poku stated the culture which was being showcased today, is one of the instruments by which we can use to promote understanding and co-operation between Ghana and the USA.
When asked what he thought about the event, H.E. Fritz Opoku said; "Certainly I am really pleasantly surprised about the organizing ability of the Ghana National Council here and I take this opportunity to congratulate them. What I have seen is something unparallel as far as my attendance of the Ghanaian government in the US. I am very much impressed about the show that has been put up and the many people of African descent as well as citizens of USA who are present to get an appreciation of our culture"
On how the President Kufour feels about Ghanafest, H.E. Fritz Opoku mentioned that the festival goes well with the policy of government and had indicated earlier in his official address that Ghana government through the Ministry of Tourism is embarking on an initiative in order to use tourism and culture as a platform to promote diplomacy. When asked what piece of advise he has for the organizers, he made a reference to the latter part of his statement where he advised the organizers of Ghanafest to be innovative and also be in the position to reach out not only to Ghanaians in the diaspora but also to people of African descent as well as the US citizens so that they can show appreciation of our culture and also outlined what it means for Ghanaians to be able to interact with people of other cultures. This need not to lead to a clash of cultures, the cultures that we have should compliment one another.
On another note; since it was the first time of meeting, H. E. Fritz Opoku in person upon assuming the position as Ambassador to US, Mr. CNN took the opportunity to congratulate the Ambassador on his position and commended him on the great job he is doing. H.E. Fritz Opoku in turn accepted the commendation and offered an inspiring piece of advice that it is a great responsibility as a Journalist to be able to post positive images and messages about Ghana.
Sika Radio was also covering the event live! DJ BC also told Ghanaweb it was fun and that it was the first time he has attended and he enjoyed it. He congratulated the organizers for doing a great job.
Interestingly, excitingly and inspiringly, Nicholas Opoku an artist earlier has presented a portrait of H.E. Fritz Opoku to the Ambassador. When asked what made him decide to offer such an honour, Nicholas said he had met the Ambassador three months ago at the residence of the Governor of Illinois and also H.E. happens to know his father so there is a little connection. He heard the Ambassador was attending Ghanafest and decided to draw a portrait of him. He has drawn many well known figures including Osagyefo Dr. Kwame Nkrumah, the father of our nation and J.J. Rawlings, former president of Ghana.
H. E. Fritz Opoku should be commended for his presence and putting smiles on many attendees' faces.
Ghanafest 2005 in Chicago was a success and congratulations to Reuben Hadzide, Ebenezer Nsiah and the rest of the executives for the great team work exhibited. It has left a lasting impact on attendees and definitely next year is something many people would look forward to.
Speaking to Mr. Reuben Hadzide this morning, he confirmed to me that his executives are behind the open invitation to President John Agyekum Kufour to attend Ghanafest 2006.
Mr. CNN's trip to Ghanafest for coverage was sponsored by Mr. Thomas Nyarko and Black Star Travel and Tours, New York.