The Return Of Bawumia 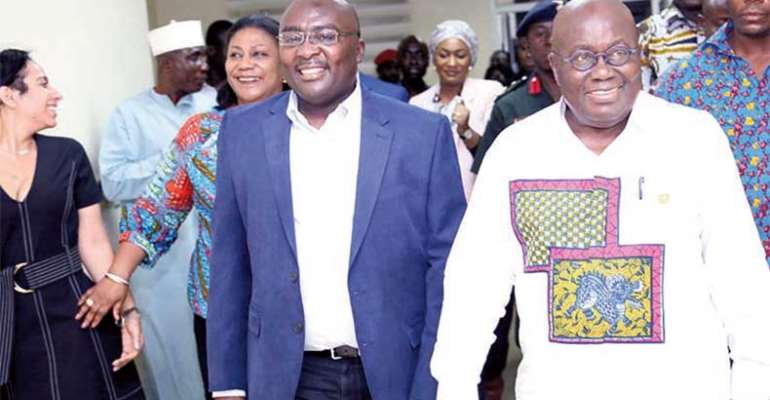 OPTING TO WRITE about Bawumia's episodic journey to the United Kingdom on medical leave and return, one's mind would race back to books and poems that one had read about ' journeys' and ' returns'.

One might have read about the 'Journey of the Magi' written by T.S. Eliot in 1927: “A cold coming we had of it, just the worst time of the year…We returned to our places, these kingdoms, but no longer at ease here in the old dispensation. With an alien people clutching their gods, I should be glad of another death.” One must have read the 'Return of Ulysses' in which Ulysses was trying to make his way back to Ithaca after the Trojan War. One must have read 'Ayesha-The Return of She' in which the author, H, Rider Haggard wrote to Lang: “ The appointed years-alas!” How many of them are gone by, leaving Ayesha lovely and loving, ourselves alive. As it was promised in the Caves of Kor, she has returned again.'' One must have read 'The Return of the Soldier' written in 1918 about the First World War by Rebecca West. With a limited point of view and non-linear narration, the author clearly exposes the genre as psychological and war. It was revealed that Chris got partial relief whenever he was with Margaret, and he demonstrated great faith in the improbable. Kitty's exclamation: 'He's cured' sums up the fall back in the healing of Chris's amnesia.

The departure of the Vice-President Mahamudu Bawumia was couched in a terse message from the Presidency:”… he was undergoing medical observation when he reported feeling unwell.'' (Paraphrased). There were speculations, especially from among the opposition parties who, perhaps, wanted a full disclosure of the Vice President's sickness. The other dimension was whether the rush to a European Hospital did not amply demonstrate the lack of adequate facilities in our own hospitals. In answer to all the speculations and suppositions, Abu Jinapor, a Deputy Chief of Staff argues that the NPP had been transparent, and not kept Ghanaians in the dark from the first day the Vice President took ill. Comparing notes, he intimated that the NDC was not transparent about the health of President John Evans Atta Mills – why do we add: 'may his soul rest in peace? Is that done for everybody? Of course, Ghanaians can well remember how the former President, after a 'routine check – up', was jogging on the tarmac of the Kotoka International Airport.

Bawumia was met at the Airport by the President Nana Akufo Addo, his wife, Rebecca and various dignitaries on last Thursday. It was all – hug for the Ministers of state and Parliamentarians. The fact that he had taken a good rest was apparent on his face and demeanour. The reception was overwhelming; it was colourful – but very brief. No jogging! No bussing of party supporters to cheer him up! No long talk – business was to start the following day!

When the President, Nana Akufo Addo had to travel outside the country, and in the absence of the Vice President, the Speaker, Professor Mike Oquaye was sworn – in on two occasions as the President of Ghana. Characteristic of him, the Speaker demonstrated his presidential credentials and steered the affairs of state so perfectly. Thus my affable tutor and mentor has 'chopped' the Presidency for some days. Very exciting, but the controversy still rages on. Despite the Supreme Court ruling that any time the Speaker assumes the role of President, he must be sworn in, there are agitations in the Opposition that it is all waste of time, money and resources summoning MPs for just that 10 – minute exercise. Ras Mubarak, for example, has indicated seeing his lawyers for Supreme Court's interpretation of Article 60 (11) and 12) of the Constitution of the Republic of Ghana, 1992, which (i) enjoins the speaker to act when both the President and the Vice are unable to perform the functions of the President and (ii) the Speaker has to subscribe to the oath of office as President. Good for lawyers; they must earn something to compensate them for their toil especially at Makola. Mo nnyegye ho. Saa na eye.

In the absence of Dr Bawumia, there erupted great hullabaloo on charges of corruption against the officials of the Ministry of Trade. It was dubbed 'cash-for-seat' and the speaker was compelled to set up a committee to investigate the matter.

It emerged after the committee's sitting that there was no wrong doing in the Ministry. The officials including the Minister, Allan Kyerematen and the Deputy Minister, Carlos Kingsley Ahenkorah were cleared of the corruption tag that had hung on their necks as an albatross. The opposition NDC have threatened to publish the Minority report, because they were not privy to the 'official' one submitted to Parliament.

Again, during the short period when the Vice – President was away, the Auditor General lamented the lack of prosecutorial powers of his office. Daniel Domelevo, the Auditor General, must be a very sad man – to see fraud 'fiili – fiili' and not be able to take personal action. He says: '' If the Attorney General gives me a fiat, which I have actually applied for, you will see me in action''. Among the various MDAs whose liabilities have been rejected are: the Electoral Commission, Ministry of Youth and Sports, Ministry of Tourism, Culture and Creative Arts. In the 2016 Auditor- General's report, the total outstanding commitments submitted by the MDAs through the Ministry of Finance amounted to GH¢ 11,279,183 400.09. After the validation, a total GH¢ 5,570,574,500.24 was certified for payment. But how did the Ministry of Railways Development which was not existent between 2014 and 2017 present a budget of GH¢ 139.9 million for payment?

Yet again, during the Vice-President's absence, there emerged a video tape on sexual encounter between an amorous headmaster and an erotic pupil (rather student, because she is around 20 years) the girl appears to have succeeded in 'surprising' the headmaster by the way she twisted and turned her torso, and by the way she expressed her delight in the orgy, repeatedly saying “Oh my God”. The headmaster's wife is pleading for the restoration of her husband who is the sole breadwinner of the family. But did the man feel comfortable with his trousers on, and the girl on the 'ada-ma-dwa' (stool), with her panties down to her thigh. As a Christian, I have decided not to watch the tape, but I have read bits and pieces from meddlesome busybodies who chanced upon the video recorded by Mr Robert Sepey himself and intruded upon by the girl's brother. Meanwhile, in Ejisu, the girl – students are talking – claiming that they go to the male teachers to earn money to pay their school fees. A female student claims: “Some of the girls agree to the pressures of the teachers just to pay their fees. In my quest to pay my fee arrears, I once slept with one of the teachers…He threatened to ensure that I'm sacked if I ever revealed the details of our sexual affair to anyone. Should a teacher teach everything including sexual gratification? Mr Vice President, don't get bogged down by these peccadilloes.