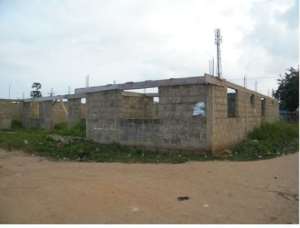 The Chiefs and People of Gomoa Pomadze on the Winneba Swedru road have launched their 2018 AKwambo Festival to mobilise funds towards the completion of a Police station under construction.

The festival, on the theme 'Security: A tool for ensuring peace and growth in society' will commence from Monday 12th February to Sunday 18th February 2018.

Gomoaba Nana Apetekofi V, Odikro of the town addressing the gathering said the main objectives of the construction of a police station was because of rampant armed robbery activities in and around the area.

According him, they petitioned the then Inspector General of Police Mr. Mohammed Alhassan for the establishment of a Police Unit in the community to curb armed robbery activities in the locality.

'We released land free of charge for the project, the current Central Regional Police Commander, DCOP Rev. Nenyi Ampah-Benn came and cut the sod and since crime prevention is not the responsibility of Central government alone, we as a community started the project three years ago, but due to non-availability of funds the project came to a halt'.

Gomoaba Nana Apetekofi V said continuous armed robbery necessitated the competition of the said project for police personnel to be posted there and appealed to his people in and outside, as well as well-wishers of the town to come and fully participate in the activities earmarked for the festival and donate generously to enable them achieve their objectives.

He reminded his people and all who would join them especially the youth on the deadly HIV and AIDS which still had no cure and also advised the youth against high intake of Alcohol.

Mr. Samuel Essandoh, the Planning Committee Chairman of the festival, disclosed that activities earmarked to be carried include, general Clean-up exercise in the town on 12th February and Church service to thank God for bringing them that far, Keep-fit exercise, with aerobics, Visit to Dadaw to Display indigenous traditional games, and a grand durbar of chiefs,