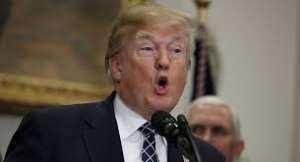 THE U.S President Donald Trump has typically stirred controversy recently with his “shithole countries” comment purportedly made by him in reference to certain countries in the world- a statement that has generated passionate reactions and comments all over the world. The good aspect of Donald Trump’s “shithole” comment is that it has initiated a lively debate on what truly qualifies a country to be categorized as a shithole country.

African countries may have their share of challenges confronting them, but to classify them generally as shithole countries as was done by Donald Trump is to persist with that general and negative stereotyping of Africa that western countries have employed for so long to put Africa down as a good for nothing continent. Sadly, such persistent negative stereotyping of Africa has been embraced by even some misguided Africans themselves who have found it as a convenient excuse for putting down their own countries for various parachocial reasons.

The critical point for consideration in the discourse for determining which country truly fits the shithole classification is that it is a very subjective call to make. What Donald Trump may thus consider as fitting his standard category for shithole countries may not qualify in another person’s standard for such classification. In effect therefore no country in the world can escape being classified as a shithole country including Donald Trump’s own America. Perhaps a better statement would be to say that we all live in a shithole world considering all the problems confronting the world today such as terrorism and global warming which Trump has refused to recognize as existent.

America surely has its share of issues that would let it fit the bill of being classified as a shithole country. Examples of such issues are as follows; a high crime rate in most cities in America, (senseless murder of innocent citizens including school children endorsed indirectly by anti gun control advocates), high drug abuse infested societies, a high tolerance of homosexual activities culminating in official endorsement of gay marriages, pervasive levels of racism and discrimination in most spheres of American society that makes it a real taboo for whites to marry blacks in America.

In this same context one can also make a strong argument that a political system such as the U.S system that makes it possible for Donald Trump to emerge as its President is the very embodiment of the shithole classification that he is tagging other countries with. His penchant for insults and lack of decorum in his communication style is in itself a big blot on the American Presidency and image of America internationally, and qualifies America for shithole status in another sense. In effect therefore not all that glitters is gold as the saying goes.

Yes there are challenges and negatives in African countries today that need addressing, but there equally are positives that one can be proud of about Africa. It is therefore highly inappropriate and intellectually bankrupt for any one more so a President of America to refer to any other country in the world in such derogatory terms.

In essence what constitutes a shithole country is very subjective and depends on a myriad of factors that may not even let America itself escape that classification.

The lesson for African countries therefore is to begin to project the positives of Africa more forcefully. They should fight the continuous and deliberate negative projection of Africa which is the underlying reason for Donald Trump’s unfortunate “shithole” comment, while tackling aggressively and urgently the challenges facing them.

We’ll Resist Attempts To Use BOG’s Funds To Finance NPP’s El...
26 minutes ago