The Lord is my strength - Dominic Eduah praises God 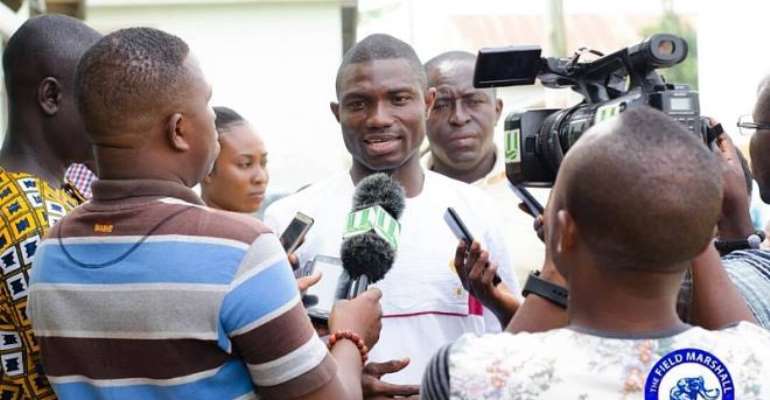 The Deputy National Youth Organiser of the ruling New Patriotic Party (NPP), Dominic Eduah has expressed his heartfelt appreciation to Almighty God for saving him and his campaign team from a fatal accident.

Dominic Eduah popularly known as 'The Field Marshall' and his campaign team on Sunday, February 4, 2018 were involved in a fatal accident whilst returning from Wasa Akropong in the Amenfi East Constituency of the Western after attending a final funeral rites of Kofi Ntiako the Deputy Constituency Youth Organiser of Amenfi East.

The Deputy National Youth Organiser and his team all escaped unhurt.

Speaking to the media after the incident, Dominic Eduah who is vying for the National Youth Organiser position of the party to succeed Sammy Awuku described the incident as very serious and only saved by the hand of God.

"If you've seen our car, you will know that we were saved only by the hand of God, and I praise Him that He used so many people to keep us alive and who will help us get back on our feet", he thanked God.

According to him, "I want to express my sincerest gratitude to the entire Amenfi East Constituency Executives, the Western Regional Executives of our great party, polling station Executives, Tescon presidents both past and present and the entire Elephant fraternity both home and abroad, the NPP youth wing led by my boss Sammi Awuku for your calls,text messages, voice notes, emails and prayers for your massive show of support and goodwill".

"No weapon that is fashioned against me shall prosper, and you shall confute every tongue that rises against you in judgement. This is the heritage of the servant of the Lard and their vindications from me, says the Lord", he added.

He also added, Whoever dwells in the shelter of the Most High will rest in the shadow of the Almighty. I will say of the Lord, “He is my refuge and my fortress, my God, in whom I trust.” Surely he will save you from the fowler’s snare and from the deadly pestilence. He will cover you with his feathers, and under his wings you will find refuge;I will say to the Lord, he is my refuge. The plots of the enemy will never work because the one who dwells in us is above principalities. Psalm 91 :1-4.

"I cannot express adequately my gratitude and feelings. Bless each and everyone of you", he emphasized.

"We are still in Takoradi undergoing some treatment to if there is any internal breading ", he told the media