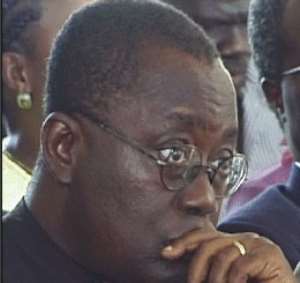 There are very strong indications that Nana Akufo-Addo, the foreign Minister will end up as the New Patriotic Party's presidential candidate for the 2008 elections. Party insiders say that there is nobody in the struggle for leadership who matches Nana Addo's credentials.

Mr. Victor Newmann, an accomplished strategist of the NPP compares Nana Addo to Mr. Gordon Brown of the Labour Party of the U.K. In a widely publicized memo, Mr. Newmann did not show any bashfulness in declaring Nana Addo as the lieu apparent. Nana Addo's history is impressive. As a young man in the University of Ghana, Nana Akuffo Addo became an activist of the Convention People's Party (CPP), and a loud advocate of socialism. This was in spite of the fact that this father was clothed in a neo-colonial garb and was a passionate advocate of right wing democracy. For some unexplained reasons Nana Addo abandoned the Nkrumaist tradition after the February 1966 coup which overthrew the Convention People's Party (CPP).

He however retained his radicalism largely as a result of his contacts with French and English radicals in the 1970s. Nana Addo is or was politically close to Professor John Evans Atta Mills, the NDC presidential candidate for the 2000 and 2004 elections. Captain Kojo Tsikata, former head of national security, Dr. Modibo Ocran, now a Supreme Court judge and Mr. Agyei Sekyi, editor of the Ghanaian Post. Nana Addo has actively participated in the struggles of the people of Ghana for democracy and social progress.

In the late 1970s, Nana Addo became one of the founders of the People's Movement for Freedom and Justice (MFJ) along with people like Professor Albert Adu Boahene, Mr. K.S.P. Jantuah, Mr. Komla Agbeli Gbedemah, Mr. Johnny F.S. Hansen and Lt. General Akwasi Amankwa Afrifa. It was the struggles waged by this movement and professional bodies, the National Union of Ghana Students (NUGS) and a section of trades union which led to the military revolt of June 4, 1979.

Nana Akufo-Addo joined hands with Mr. Harry Sawyer, now of the NDC, Professor Adu Boahen, Mr. Peter Ala Adjetey, who became chairman of the NPP and others to found the United National Convention (UNC) under the leadership of Mr. William Ofori-Atta.

Some NPP analysts blame the emergence of the UNC for the failure of the Popular Front Party (PFP) led by Mr. Victor Owusu to capture power in 1979.

Nana Addo was silent in the early days of the PNDC dictatorship and he did not join the Movement for Freedom and Justice (MFJ) chaired by his mentor, Professor Adu Boahene. He contested for the presidential candidature of the NPP and lost. In 1995, Nana Akufo-Addo joined Kwesi Pratt Jnr, Dr. Nyaho Tamakloe, Victor Newmann, Dr. Charles Wereko-Brobbey, Akoto Ampaw and Kweku Baako to establish the Alliance For Change (AFC), which campaigned against the introduction of the Value Added Tax (VAT). When President J.A. Kufuor assumed office in 2001, Nana Akufo-Addo was appointed as Attorney General and minister of justice. Admittedly, his performance as Attorney-General and Minister of Justice was below standard as he was whipped by Mr. Tsatsu Tsikata in a suit filed at the Supreme Court and in a case which had been brought up at the high court in Accra.

Nana was eventually sent to the Ministry of Foreign Affair as minister and reports indicate that he is doing well. It is held in party circles that apart from Nana Addo, the other favourite is Mr. Yaw Osafo Maafo, Now Minister of Education and Sports.