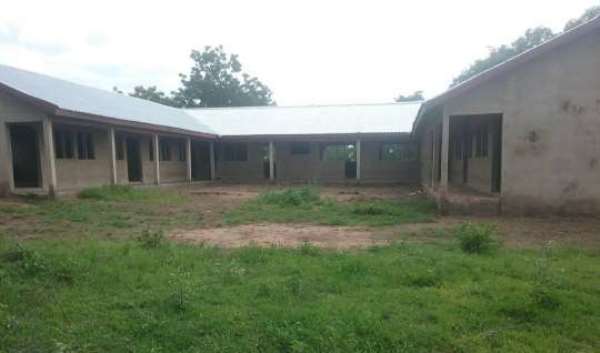 A six-unit classroom block and teachers’ bungalow for Tousa L/A Primary School in Wa East, awarded on contract in 2011, has been abandoned, forcing pupils and teachers to undertake lessons under trees and in crumbled old rooms.

The School with enrollment of 220, and located in the Wa East District of the Upper West Region, was expected to have been completed in 2012, but was soon deserted after the presidential and parliamentary elections in 2012.

Mr. Yussif Moomin, Headteacher of the School, told the Ghana News Agency on Thursday that the education facility also lacked furniture for both learners and teachers.

He appealed to education authorities and duty-bearers to take swift action to revamp the 'dumped project' and alleviate the plight of children and staff as the psychological and health implications of learning under trees could be severe.

Information gathered by the GNA indicated that, the contract was awarded in 2011, and work started immediately, but halted soon after the 2012 polls, when the then District Chief Executive also secured a parliamentary seat.

The situation in the school environment has created overcrowding in classrooms as multiple classes have been merged and the pupils forced into the joint rooms.

According to GNA’s checks, repeated attempts by the then District Chief Executive, Abudu Abdul-Karim who took over the administration in 2014 to get the contractor back to continue the project proved futile.

Mr. Bayorn Dramani, the Assembly Member for Tousa Electoral Area said “the issue of abandoned projects has become a concern on daily basis, yet we are not seeing any positive result.”

“Others also sit in a shed provided by the PTA [Parent Teacher Association], but during the rainy season when it's cloudy and ready to rain, we do allow them to run into the structure,” he added: “We complained to the Assembly but they've also failed us.”

However, Mr. Evans Kpebah, the Upper West Regional Education Director, who is also the Acting Wa East District Director of Education, when contacted by the GNA, confirmed the six-unit primary school project had essentially been dumped, and that he could not find the contractor responsible for the project.

“I have sketchy information about the school project, the project commenced in 2011, it is actually true that it has been abandoned,” he said: “it is roofed but the floor is not plastered, no windows and no doors put in.”

“According to sources, the contractor is one Mr. Tanko and he is from Bawku, and I don't know who awarded the contract, that is all what I can say about the project,” he added.

The District Chief Executive for the Wa East district, Moses Jotie, said he was aware of the uncompleted school building but pleaded for more time to have a full report on it.

His plea followed weeks of contacts by the GNA to have him speak on the matter, and how the Assembly could help salvage the 220 pupils and their teachers from having regular lessons under trees and in overcrowded classrooms that expose learners and teachers to health risks.