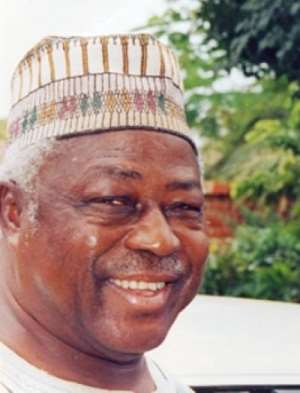 Family members of former President Dr. Hilla Limann have organised a solemn Remembrance Day of his death at Gwollu in the Sissala West District.

It was on the theme: 'A nation that does not honour its heroes is not worth dying for.'

The Gwollu Kuoru said Dr. Limann died with it, without eradicating the unproven name and image to him; nor any apology so as to wash clean the inhuman suffering meted out to him by the PNDC regime', he said.

He said Dr. Limann died with his hands clean and his conscience clear and free and no single political detainee on ascension to power was made.

'Such was progress recorded that at the time of Dr. Limann's illegal overthrow by Rawlings and his Provisional National Defence council, 27 months after assuming office', he stated.

Kuoru Buktie Limann stated that the 1992 constitution had provided for the upkeep and wellbeing of former Heads of State of Ghana, yet Parliament had not up to the death of Dr. Limann, made any efforts to rehabilitate him, six years after the law came into existence.

He said the NDC government was aware but took no interest in the health and wellbeing of the former President Limann nor was he given his retiring benefits for his upkeep as provided under the law.

The family pleaded with government to establish a Mausoleum that had been requested by former President John Agyekum Kufuor to be built for Dr. Limann, but was not carried out.

'Government should also implement the international market that former President Kufuor promised to build at Gwollu to boost trade between Ghana, Burkina Faso, Mali and Niger.'

He called for due consideration for the establishment of Dr. Limann's effigy in Accra and memorial museum in Gwollu to befit cultural and historical endowment.

Alhaji Sulemana Alhassan, Upper West Regional Minister in a speech read on his behalf, urged family members and Ghanaians not to enquire much on the loss of former President Dr. Hilla Limann but to celebrate his life and remember all the significant things he accomplished and how wonderful his life was.

He said Dr. Limann's administration undoubtedly had a daunting task of restructuring the Ghana's economy after a long run of military rule from 1972 to 1979 and that, notwithstanding, championed the virtues of morality, abhorred selfishness and greed during his 27 months regime as President of the Republic.

Alhaji Alhassan therefore called on sons and daughters of the soil, resident in and outside the region to emulate the selfless contribution Dr. Limann made towards the development of Ghana.