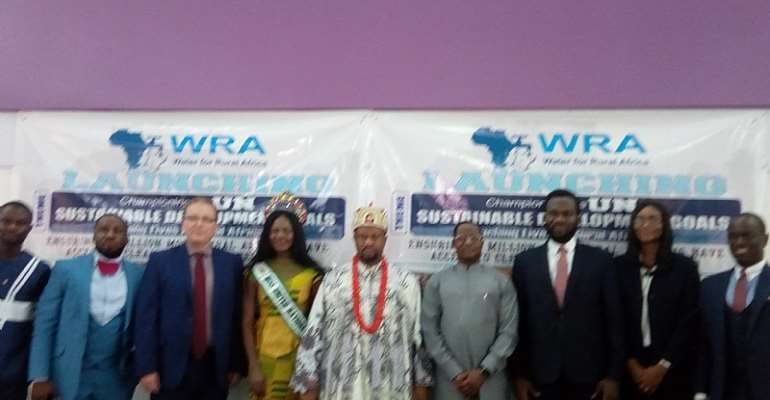 The Water for Rural Africa has called on governments of the Africa continent to develop a holistic approach in their quest to find solutions to the numerous water crisis.

This, they say will help in the continent efforts to achieve the Goal 6 of the Sustainable Development, which says " Ensures access to water and sanitation for all".

This call was made by the founder and President of the organisation, Water for Rural Africa, Dr. Donald Agumenu during its official launch in Accra.

Water for Rural Africa (WRA) is a development organisation with the aim to champion the realization of the United Nations (UN) Sustainable Development Goals (SDGs) Goal 6.

And with the mission of transforming the lives of the poorest and most marginalized communities in Africa by improving access to safe and clean drinking water and sanitation.

Clean, accessible water for all Dr. Donald explained is an essential part of the world as well Africa we want to live in for to him, there is sufficient fresh water on the planet to achieve this.

However, bad economics as well as poor infrastructure, see to millions of people, mostly been children dying from diseases associated with inadequate water supply, sanitation and hygiene.

Adding drought afflicts some of the world's poorest countries, worsening hunger and malnutrition.

According to facts and figures available to the New Independent, 2.6 billion have gained access to improved drinking water sources since 1990 but 844 million people are still without clean potable drinking water.

Furthermore, at least 1.8 billion people globally use a source of drinking water that is physically contaminated.

Adding that, over 1.7 billion people are currently living in river basins where water uses exceeds their use whilst 2.4 billion people lack access to basic sanitation services, such as toilets or latrines.

On his part, the Minister Lands and Natural Resources, Hon. Amenuvu indicated that government is in the process of developing a comprehensive policy to tackle the numerous water crisis across the country.

He also assured Water for Rural Areas of government commitment towards their project and his doors are always open for dialogue and discussion for the wellbeing and development of the ordinary Ghanaians.