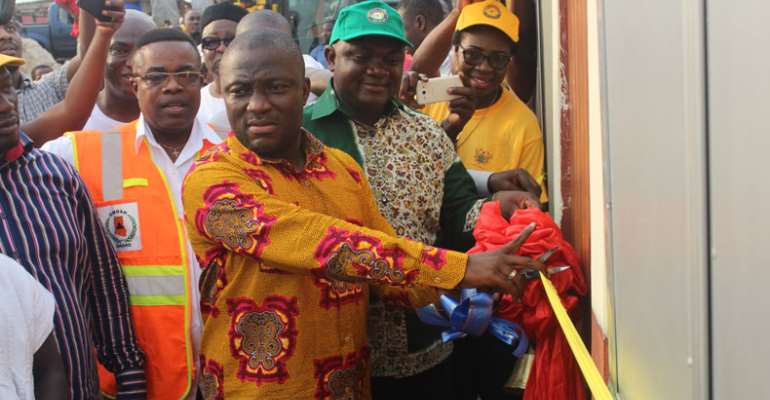 The programme dubbed 'one household', 'one toilet', will provide families who sign up to the programme with a complete toilet facility at a subsidized cost of GH¢1,100 and GH¢600 only.

The programme which is also supported by the Ministry of Sanitation & Water Resources has the ultimate objective of eradicating open defecation within the city.

Ghana currently ranks seventh worldwide and second in Africa for open defecation, the programme, therefore, poised to solve the problem of open defecation.

Outdooring the scheme at the Town Council Line Park at Ablekuma Central, Mohammed Adjei Sowah, Metropolitan Chief Executive of Accra, disclosed that the government sees the need for improved sanitation, especially in the city, and has decided to subsidize the cost of a complete toilet facility for city residents.

He indicated that the price of the facility used to be GH¢4,000 but beneficiaries of the programme would pay GH¢1,100 or GH¢600 depending on the type and the AMA through the World Bank would pay the outstanding balance.

Mr Sowah mentioned that “the facility has been designed to fit the pockets of residents” and expressed hope that the chiefs and elders of the community would lend their support to the project in order to make it a success.

Mr Sowah, however, indicated that there are a lot of newly-constructed houses without toilet facilities which force occupants to defecate in open places and drainages, and urged residents in Accra “to be disciplined enough to change this attitude. We can't continue to live like this in Accra. This is your land, this is where many Ghanaians migrate to, and this is where we live.”

The mayor of Accra emphasized his intention to change the story of poor sanitation, adding that he will not hesitate to crack the whip on recalcitrant residents who break the law on sanitation.

“I assure you that the next time I visit, I will come with public health inspectors to crack the whip on people who will not comply. People who will be found culpable will be prosecuted in the sanitation court,” he added.

The Member of Parliament for the Ablekuma Central Constituency, Ebenezer Nartey, pledged to pay 50 percent of the cost for the first 100 people who would register for the programme.