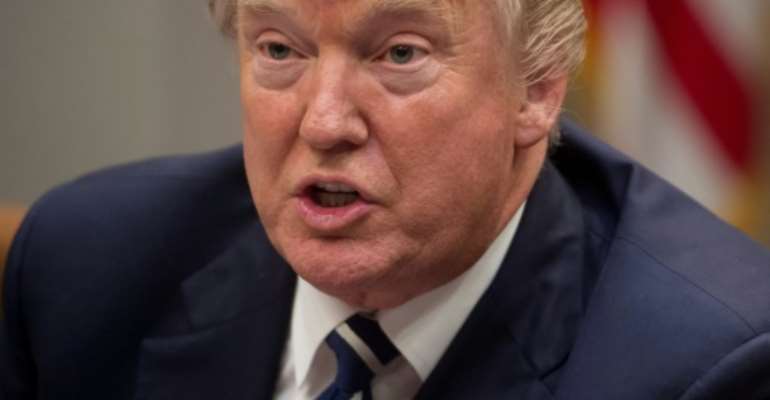 Donald Trump had a simple and easy slogan for his election campaign – MAGA – make America great again. Many think that Trump was trying to refer to Barrack Obama presidency period as a dark chapter and promised to bring back the white supremacy again. Obama is not only black but his father was a Muslim as well. White rural Americans who were not so educated got influenced; and with the help of electoral voting system Donald Trump won the election. Within a few days he proved what many Americans believed was right.

Donald Trump started his presidency with a statement which was nowhere near the truth. He said Washington had the biggest ever gathering for his inauguration. All major TV channels showed comparative gatherings on the screen to prove he was wrong.

His second action was to withdraw from Paris Climate Agreement. The United States became a Party to this Frame-work Convention under president Obama. Trump said previous president (Obama) was wrong to become a party to such a treaty which was basically against American interest. In fact he (Trump) was wrong to withdraw from such a global agreement that was designed to protect the earth for future generations. Because of Trump’s action the United States lost its leadership position on this important issue. The rest of the world ignored the US decision and is moving ahead with their role and responsibility.

Trump expressed his dissatisfaction over nuclear deal signed with Iran by six nations during the period of president Obama. Trump threatened to withdraw from the deal but got no support from others. On the contrary the five other nations recently held a review meeting with Iran and expressed their satisfaction with the progress. This was an insult to the United States.

CIA instigated some agitation in Iran against the government which the Iranian government suppressed within days. Trump’s ambassador to the United Nations Ms Nikki Haley called an emergency session of the Security Council to discuss the Iran matter. Not a single member of the SC agreed to discuss the matter as they considered it an internal matter for Iran. It was another diplomatic snub and slap for Trump.

President Barrack Obama rightly realised that the sanctions imposed on Cuba was meaningless and to no benefit. He normalised relations with Cuba and even visited Cuba. No sooner Trump came to power he found some vague and imaginary grounds to impose some new sanctions against Cuba. This time the US allies refused to follow and decided to continue their good relationship with Cuba. The EU adviser on foreign affairs visited Cuba and confirmed its support to strengthen their relations with Cuba even closer. It was yet another diplomatic snub for Trump.

President Bill Clinton during his presidency arranged for a series of peace negotiations between Israel and the Arab world. The US position was very clear. It supported the existence of Israel and at the same time it recognised the rights of people of Palestine for a homeland of their own. The difficult and delicate process of negotiations was in progress as to how a satisfactory solution can be found acceptable to all parties. The most complicated dispute was over the future of Jerusalem. Both sides had due respect and regard to US role as an impartial negotiator. Then president Trump suddenly announced one day that he was going to do something that no other president before him dared to do though they very much wanted to do. By so saying he declared his intention to recognise Jerusalem as the capital of Israel. By so doing Trump sided with Israel and acted against not only the people of Palestine but also against the Arab and Muslim world. None of the previous presidents of the United States were stupid enough to do such a thing to destroy the image of the United States. With this action president Trump removed and buried the leadership role of the United States once for all. No previous president tarnished the respect and image of the United States to such an extent.

The Security Council met in an urgent session to condemn the US decision. However, in exercise of its veto power the US managed to stop the resolution. The matter was then taken to General Assembly and Trump threatened to cut all aid to all developing states if they vote against the US. The General Assembly passed the resolution condemning the US action on Jerusalem by a huge margin. The US Vice-President was supposed to visit Middle-East but had to cancel the trip because no Arab leader would meet him after the Jerusalem matter.

Recently in a meeting in White House (Oval office) on immigration matter (perhaps on 11-January-2018) the president used very insulting and humiliating language for some Latin and African countries in presence of several senators. He refused to accept anymore immigrants from “shithole” countries and said why he should not accept immigrants from country like Norway. BBC reporter interviewed a number of Norwegians very next morning in the streets of Oslo about the remarks of the US president. None of them showed any interest to go and settle in the US. Haiti, El-Salvador and a number of African nations expressed their concern on this issue. Two days later his Ambassador to Panama resigned. The ambassador expressed his inability to represent Trump’s administration anymore. In the history of White House, no other president ever used such foul and offensive language. Perhaps president Trump forgets that he is the son or grandson of an immigrant because the original US belonged to the Red Indians.

President Trump was invited for a State Visit to the United Kingdom. It was supposed to take place sometime in February, 2018. The British people are very politically conscious and because of his racial hatred Trump was not very welcome in the UK. The mayor of London made it known that he would not arrange a civic reception. Sensing the public sentiment Her Majesty the Queen was also hesitant about a dinner at Buckingham Palace. Thanks God, Trump had enough good senses to understand what sort of reception was in waiting for him in the UK and he postponed/ cancelled the trip. He had to find some official excuse. Once again he found something connecting former president Obama. He said that he was very upset about Obama having sold off the previous property in such prime location so cheaply and he would not like to cut the ribbon for opening ceremony of the new US mission. In the opinion of the US Ambassador to Britain the new building for the embassy is one of the finest in the world.

Let us discuss about his exchange of verbal war with the leader of DPRK. North Korea is not one of the leading nations in the world – economically, politically or even militarily. There is no democracy or human rights in that country. There is no comparison between DPRK and USA. Trump should have never compared his country in any respect with DPRK. By going into those verbal exchanges, he has downgraded the position and status of the United States. DPRK leader Kim said about having the nuclear button in his desk and Trump replied, “I have a bigger one and it works”. Such utterances by a US president are shameful and disgraceful. He behaved very much like Late Idi Amine of Uganda though he calls himself a genius. Idi Amine also used to think the same way.

Turkey was the strongest US ally in the region. This was because Turkey was the front-line state against former USSR and Warsaw pact. That relationship is now gone. Turkey has recently signed a deal with Russia to buy its missiles. Trump succeeded in losing another long time trusted ally of the United States. Similarly Pakistan had bilateral defence pact with the United States. It also belonged to CENTO and SEATO. The spy plane U-2 shot down over Russia had flown from Pakistan. It was from Pakistan that Kissinger had flown to Beijing to establish the new relationship. Today the United States lost that friend as well.

I can conclude this article by saying that Trump has caused such damage to the nation in mere one year of his presidency that may take more than decades for future presidents to repair and recover. His attempts to disgrace president Obama has backfired. Obama left clear mark of distinction and will be long remembered as a sound, sober and successful president. People will perhaps try to forget about Trump even before he leaves his position as president.