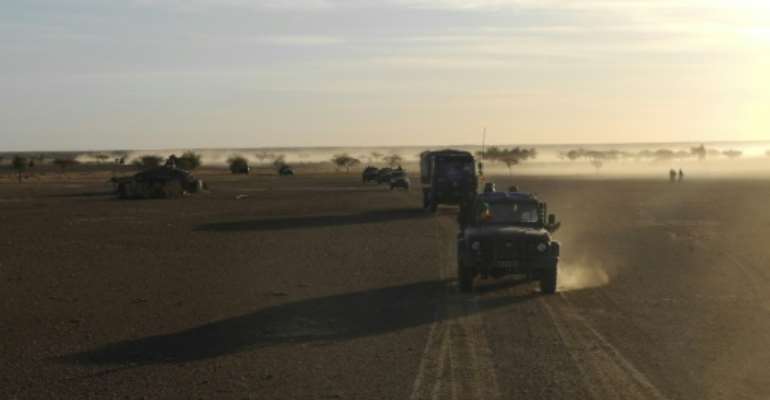 The G5 Sahel force will number up to 5,000 troops from Mali, Niger, Burkina Faso, Chad and Mauritania. By DaphnÃ© BENOIT (AFP/File)

Five Sahel countries - Mali, Mauritania, Niger, Chad and Burkina Faso -- on Monday launched their second anti-Jihadist operation in the troubled region, after talks in Paris with their partner France.

After the discussions between the defence ministers of the so-called G5 Sahel and their French counterpart no details were released about the new operation due to "security reasons".

"We are moving forward... the joint force is gaining momentum... the first operation has taken place, the second one is starting today," Malian Defence Minister Tiena Coulibaly told a press conference, alongside his G5 counterparts and French Defence Minister Florence Parly.

The force has been operating, with heavy French backing, to re-establish control in lawless frontier regions in the Sahel, south of the Sahara, where terror groups have been able to flourish.

"Jihadist groups are extremely mobile, however we have observed a particularly critical area, the 'tri-border' area, which is why G5 Sahel forces are focusing efforts there," said Parly

The "tri-border" area is where the frontiers of Mali, Niger and Burkina Faso converge, and where the first G5 Sahel force operation "Hawbi" took place in November with French support.

At Monday's meeting the African nations also agreed on a "common roadmap" to speed up deployments of the force and to "strengthen staffing before the spring", said Parly.

The unprecedented initiative aims to create a fully fledged force of 5,000 troops by mid-2018.

The G5 Sahel countries have been hit by jihadist attacks that began in Nigeria, claiming thousands of lives, displacing hundreds of thousands of people, crippling local economies and worsening food security.

The G5 Sahel force is intended to work alongside France's 4,000 Barkhane troops, which deployed to Mali in 2013, and the UN's 12,000-strong MINUSMA peacekeeping operation in Mali.

But the five participating countries -- all former French colonies -- are among the poorest in the world and their militaries are badly under-equipped.

France, an enthusiastic backer of the force, is leading efforts to drum up funding.

That sum has enabled the first phase of operations. Another round of funding talks takes place in Brussels on February 23.

In an interview Monday with the French daily Liberation, Parly said a key goal of the G5 Sahel plan was to ease dependence on French forces, enabling them to pare back their presence in the Sahel.

"The Africans themselves say it -- this security problem is first and foremost their problem," she said.

On Friday, a group claiming to be from the so-called Islamic State organisation said the various jihadist groups in the Sahel were teaming up to fight the G5 force.

"We are joining hands to fight the miscreants," said a spokesman for the group, which calls itself the Islamic State in the Great Sahara.

Western security and military sources have recently said they have detected stepped-up cooperation on the ground among the various jihadist groups in Sahel.