Where Are the Mahama Roads?--Part 1 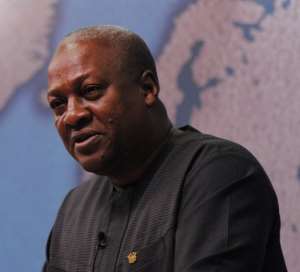 Now, more of the ugly underbelly of the Mahama government has begun to be unveiled. In the latest of such revelation, we learn from the Roads and Highways Minister that about 61-percent of the country’s roads are barely motorable (See “61% of Ghana’s Roads Poor – Amoako-Atta” TodayGh.com / Ghanaweb.com 1/3/18). What the foregoing means, according to Mr. Kwasi Amoako-Atta, is that 61-perecent of the time, road travelers and drivers are arriving at their destinations well behind schedule, because the generally poor condition of the majority of roads and highways in the country means that careful drivers are often driving at a much slower pace than they would ordinarily need to.

Now, this revelation fascinated me in no mean way because in the lead-up to the 2016 general election, then President John Dramani Mahama went on the stumps chest-thumping and boasting that his was the first government in the country’s postcolonial history to have conducted or reconstructed the most mileage of roadways. We even had then-Deputy Communications Minister, Mr. Felix Ofosu-Kwakye, bitterly lament, publicly, that in view of the fact of its nonesuch record of road construction, the leaders of the National Democratic Congress (NDC) had expected the overwhelming majority of Ghanaian voters to have cast their ballots for the NDC.

But, perhaps, the most memorable bragging about what these faux-socialist politicians disingenuously classified as “massive infrastructural development,” was when then-Vice-President Kwesi Bekoe Amissah-Arthur drove up the Okwawu Scarp and chauvinistically attempted to rile up Okwawu tribal sentiments against the Akyem-descended Candidate Addo Dankwa Akufo-Addo. “We have built all the roads in the Kwahu District and provided you with potable drinking water, and so we expect the people of Kwahu to massively vote NDC.”

I vividly recall pointing out the parochial puerility of Mr. Amissah-Arthur, because like an ignorant and mischievous European colonial District Commissioner or Governor, the Mahama second-bananas had grossly overlooked the fact that the Okwawus and the Akyems were fundamentally one and the same people. I also pointed out the fact that the citizenry of such major Okwawu townships as Mpraeso, Nkwatia and a sizable percentage of the population of Nkawkaw, the foremost Okwawu commercial township, had migrated from Okyeman-mu. And, perhaps, for good measure, I ought to have added the historically significant fact that the greatest Ghanaian statesman and scholar of his generation, Dr. Joseph (Kwame Kyeretwie) Boakye-Danquah, had also been born at Okwawu-Bepong, where his father, Opanyin Yaw Boakye, had served as Chief-State-Drummer of the Okwawumanhene, or the Paramount Chief of the Okwawu State.

But what got my proverbial goat, as it were, was the revelation that President Akufo-Addo has had to recently pay road contractors payment arrears going back from between two and five years, totaling some GH₵ 120 million. I hope these road contractors have also been paid their inflation-inflected payment arrears. But what I actually wanted to underscore is the fact that it well appears that former President Mahama had made a routine habit of callously and unconscionably enslaving our road contractors. As well, we are informed by Mr. Amoako-Atta, the Roads and Highways Minister, that during the course of the last 11 months alone, the Akufo-Addo Administration has had to shed at least GH₵ 1 billion in salary arrears to road contractors for contracts already fulfilled.

Now, this is interesting because we have absolutely no evidence indicating that even rabblerousing and criminally irresponsible politicians like Messrs. Mahama Ayariga, Samuel Okudzeto-Ablakwa, Haruna Iddrisu and Mohammed Mubarak Muntaka have ever had a month’s salary withheld from them. And rather pathetically, we call these veritable rogues and mega-thieves our “public servants.”

Music Review: Did Obaapa Christy steal ‘The Glory’ song from...
9 minutes ago