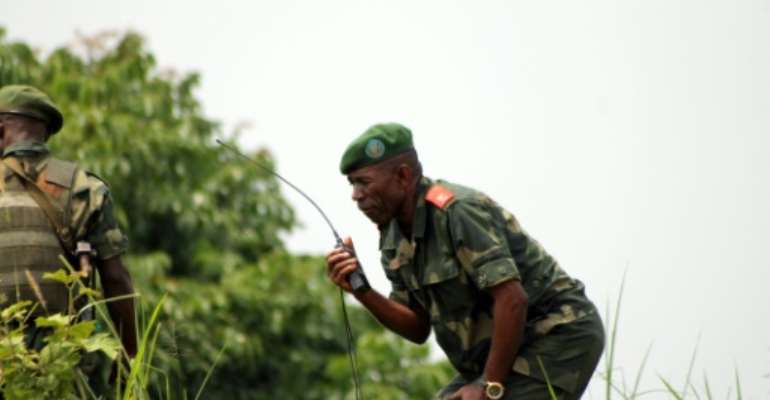 The army last week announced an offensive against the ADF. By ALAIN WANDIMOYI (AFP/File)

Democratic Republic of Congo soldiers on Monday repelled an attack in the eastern Beni region by ADF Ugandan Islamist rebels, who are suspected of murdering 14 UN peacekeepers last month.

The army had on Saturday announced an offensive against the Allied Democratic Forces, one of a number of armed groups acting in North Kivu and South Kivu -- the two provinces which border Uganda, Rwanda, Burundi and Tanzania.

"The ADF attacked our position in Muzambay at 4:00 am (0200 GMT)," said army spokesman Captain Mak Hazukay.

"Our forces pushed them back after heavy fighting."

"The firing started very early while we were still sleeping but stopped around 6:30 am," said Aimee Makinda, the wife of a soldier whose house is located near the site of the clashes.

An AFP correspondent in Beni reported hearing heavy and light weapons fire for two and a half hours from four in the morning.

Present in DR Congo since 1995, the ADF was created by Muslim radicals to oppose Ugandan President Yoweri Museveni's rule.

Congolese authorities and the UN mission in DR Congo, MONUSCO, accuse the group of killing more than 700 civilians as well as combattants in the Beni region since 2014.

Four Reportedly Killed In Robbery Attacks In Kumasi
46 minutes ago