You Can't Accuse Us Of Indiscretion--Trade Minister Alan 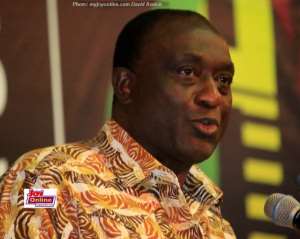 The Minister of Trade, Alan Kyerematen, on Friday, stood his grounds that the Ministry cannot be accused of official indiscretion for accepting voluntary contributions and sponsorship to organise an event for which receipts were issued.

Mr Kyerematen told the Ameyaw Cheremeh Committee probing the allegation of “cash for seat” and extortion of money from expatriates during the Ghana Expatriates Business Awards (GEBA) committee’s sitting at the Parliament House in Accra that, 17 people, including President Nana Akufo-Addo” in total, were at the presidential high table on the night of the programme.

The Ministry of Trade and Industry is alleged to have charged expatriates up to $100,000 for access to President Addo Dankwa Akufo-Addo during the recently held GEBA.

“Mr Chairman, for the avoidance of doubt, none of the persons mentioned made a contribution of $100,000 prior to the event,” he stated.

He added that there were representatives of organisations, who did not make any monetary contributions before and after the event.

“There were three of them; these were individuals, who were seated at the high table but made no contributions either before or after the event.”

He, however, said seven others made prior contribution, with two individuals also contributing after the event.

“I know that there was one individual who was seated on the high table who has come out publicly to confirm that he paid GHS 13, 000,” he recalled.

He said: “Until now, I have not heard or seen any individuals make a specific allegation in respect of extortion or levy. But I have made my submission and hopefully, that will come to the end of the matter.”

Mr Kyerematen cautioned that the allegation of the Government of Ghana extorting monies from the expatriate business community has a big potential to dent the international reputation of the nation and affects her drive for foreign direct investment.

“Since the allegation broke out we have had to endure a controversy that has the potential of making very significant damage to our international reputation.”

Despite seemingly disagreements and arguments by some members of the committee on whether the president mentioned in the allegation was President Nana Akufo-Addo or another person, the Minister, who went through a marathon testimony of more than six hours, concluded, saying, “I hope that as I said earlier on we’ll come to the final determination of this matter.

Although the Office of the President has indicated no wrongdoing on the part of the Minister in the organisation of the event, legislators of the Minority Side of the National Congress (NDC) accused the Ministry of wrongly levying and collecting various sums of money from expatriate business people to enable them to sit close to President Akufo Addo and later have a private dinner with him.