When The Watchman Is The Burglar 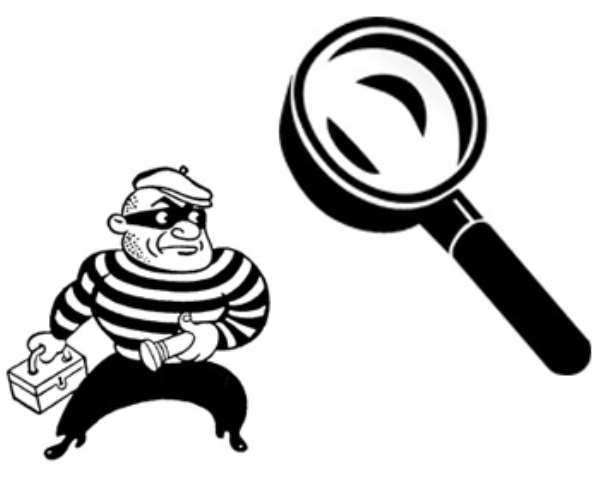 Trust is an essential tool in life and since no individual can do everything by himself we will always need others to help us achieve our goals.

You therefore need people you can trust and the more delicate the job the most trusted person you need and one of such persons is the WATCHMAN.

He must be someone you can really really trust since you need him most when you are half dead or let me use the right word fast asleep.

The basic work of the watchman therefore is to protect you and prevent burglars from breaking into your home.

Now if the watchman become the burglar that breaks into your home you can imagine what will be left of you, trust me nothing because he knows when to break in and knows where every item is situated including your waist n power bitters in fact he will sweep the whole compound and leave safely without any trace.

This is what our Creative industry is now suffering from, our watchmen have become the burglars and it's so pathetic, they have no principles, they have no shame and they define that "stupidly" as smartness.

Just like Esua sold his birthright to Jacob for york3gari because of hunger our fore bearers have sold our rights to our neighbours called Naija in exchange for their peanuts that only satisfies their greedy & selfish pockets.

Every industry has fore bearers and if those people are weak any smart business man will walk into that industry buy them and take control of that industry.

From day one we have never complained of Naija songs entering into our system until it was being institutionalised and that's when those who see into the future started complaining.

Under the institution of marriage Ghana Music Awards was introduced and it was owned by a Nigerian and anytime we complained the excuse was that he is married to a Ghanaian. Anyone who complained bitterly about the scheme was eliminated and am looking forward to perhaps an elimination at the end of this writeup 😜. Worse of all a couple of institutions were also eliminated and one of such was the Producers Association of Ghana and no one came to their defence.

Musiga a body that is suppose to be the leader has become a follower for fear of also being eliminated and all this is happening because we have been sold by our fore bearers.

Fact is no serious country will sit down for another country to host it's biggest awards except Ghana, ask around.

Obviously if they are investing in it then they will put their interest first so every year a new breed of their Acts are injected into our system.

They fly them in, pay them good money to perform fly them out and peanuts is given to our local acts down here. Now their Acts are so rich and indeed buying some of our Acts on credit.

Another way they tried introducing their comedians into our system was via a concept called "a night of a 1000 laughs" which had majority of the comedians coming from Naija but thanks to our comedians they have managed to stop that "foolishness" NOT because they are funnier than them BUT made them realise that this is our territory. Most of our comedians now have jobs to do.

One concept that I cannot till date understand is the Ghana Meets Naija concert which is held every year in Ghana.

They bring their artist down here in the name of competition and before they leave back to their country their music is left here. One will wonder why we have never had Ghana meets Ivory Coast or Ghana meets Togo or Ghana meets Zambia or Naija meets Ghana so we can also send our Artist to Nigeria to market them but it's always Ghana meets Naija in Ghana in fact the last one that was held out of Ghana was held in a Ghanaian community in London and I guess only Empire Ent. can help us understand this one sided concept.

The last one that broke the camels back is the recently held CAF awards in Ghana which had 7 Artist from Naija and 2 artist from Ghana.

With the Ghanaian Artist 1 sung the national Anthem so no one knew who she was, the second one sung to empty chairs and the third one realised he was being underpaid so he took the money, stayed at home and played PS4.

CAF had requested for a regional balance which did not happen and has therefore asked for investigation into why all the artist came from one country and not even the host country.

According to the Artist booking agent the committee had proposed more Ghanaian Artists for the program since it was being held here but our Forebearers deleted our names and left the names of their paymasters there.

The only way Shatta realised he was being ripped of by our own people was because he was at the same CAF awards in Naija last year and he was paid far more than what our people were presenting to him this year in his own country.

One shocking news was when Juliet Ibrahim was told at the program by one of the organiser that she was the one suppose to have co hosted the program with Drogba but when they inquired for her number our forebearers said they had no idea so they had to fly someone in from south Africa wow it's shocking because last year when CAF held it in Naija their people over there were able to get in touch with Juliet, fly her in, pay her well and fly her back but in her own country her own people couldn't locate her wow this is PHD to the highest level and it's pure madness a case of eb3ko goal dier ka nk) corner.

As for the Major sponsors AITEO I will not blame them since every smart businessman will always love to work with morons he can cheat because if you can sell a commodity that can cost me $100,000 for $1,000 so I can give you some commission won't I be happy?

Like I said CAF says they are investigating and AITEO has rendered a wanzamic apology, also that booking agent who does not sign contracts and does not have the riders of the Artist he books has also apologised.

We are yet to receive even a Useless apology from our own people who ripped us off and created this mess to the extent that they allowed Naija to serve the water under the program and we all know that water is under the national security and therefore must not be handled by just anybody not to talk of a foreign national but it happened right under the nose of the President of the Country.

I know that yes they will not apologise because they do not and will never respect us because we have allowed it. I guess we now know why Naija songs keep dominating here even though we keep calling for its play to be reduced.

I believe Ghana must not leave the investigation to CAF alone but must also investigate it as well.

Moving forward I believe this modern day slavery by these forebearers and slave masters must end.

The government also has a major role to play since what happened here with the CAF awards was supposed to be under the National Commission on Culture, Min of Tourism, Ghamro, Musiga and a proper and legal Creative Arts Council and the rest but because they the government have rendered these sectors handicapped we ended up Not showing our Culture but rather a different countries culture.

Yes our major awards over the years have been organised by a foreigner I believe it's time we owned it and I believe Ghamro, Musiga, Publishers and all the stakeholders have a major role to play in this

In conclusion we must make all the necessary institutions work including the immigration service so that work permits are acquired before people come in to transact business in order to protect our musicians and to also eliminate Selfish forebearers Senior Payola takers from the system.

The Watchman must now be arrested.
#VhimMoveMent