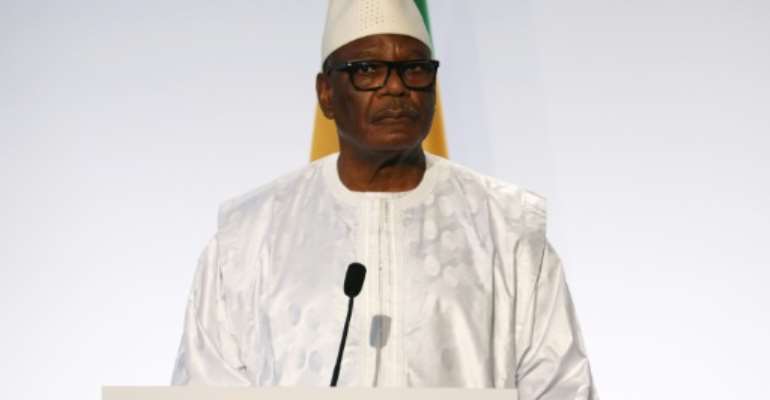 Mali'sÂ President Ibrahim BoubacarÂ Keita has not yet said if he will seek a second five-year term. By LUDOVIC MARIN (AFP/File)

A regional bank official and the head of an African tech initiative both announced candidacies for the Malian presidency on Wednesday, as the 2018 race for the troubled Sahel nation heats up.

Modibo Kone, a rural development expert at the West African Development Bank, and Hamadoun Toure, who runs the "Smart Africa" initiative to drive development on the continent via technology, said the country had suffered poor leadership.

They are hoping to unseat President Ibrahim Boubacar Keita, who has not yet said if he will seek a second five-year term, though he is widely expected to do so.

The state is still absent from vast swathes of its northern territory where in 2012 jihadists linked to Al-Qaeda mounted an insurgency on the back of a separatist uprising.

Mali's army, French soldiers and a UN mission (MINUSMA) still have little control despite chasing the jihadists out of key cities, and the spread of unrest has prompted the G5 regional forum to deploy more troops in the country and some of its neighbours.

Kone, 57, said he wanted to "fight poor governance" with a programme that would show "our country has all it needs to succeed," he told AFP.

Meanwhile Toure, 64, known for his close relationship to Rwandan President Paul Kagame and time as former secretary-general of a telecoms union, said his international experience would help his country shake off its problems.

"I have a programme for Mali, and I want my country to benefit from it," he told AFP, adding in its current trajectory the nation was "heading for disaster".

Keita has said that legislative and presidential elections will go ahead in 2018 despite delays to regional and municipal elections in recent months over security concerns.