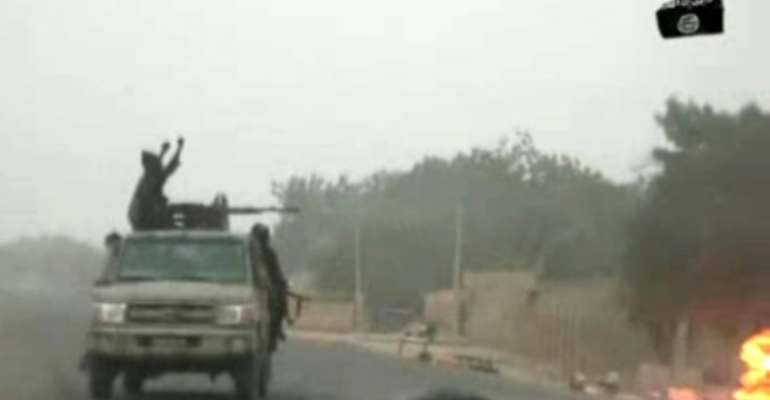 A video released on by Islamist group Boko Haram shows their fighters during a Christmas Day attack on a military checkpoint in Nigeria. By Handout (BOKO HARAM/AFP/File)

Troops from Nigeria and neighbouring countries have launched major offensives against the two Boko Haram factions and their leaders, the military said on Tuesday.

Soldiers from Cameroon, Chad, Niger and Nigeria are targeting Abubakar Shekau in the Sambisa Forest, and Mamman Nur, on and around Lake Chad, both in Borno state, northeast Nigeria.

According to the Nigerian military, scores of jihadists have been killed and hundreds of others have been forced to surrender in recent days.

Top brass in Abuja have claimed that Nur had been injured and one of his wives killed in an aerial bombardment, and that Shekau was "a spent horse, waiting for his Waterloo".

But he said four soldiers had "paid the supreme price" and nine others were wounded in a suicide car bomb attack against a military vehicle near Shekau's camp on Monday.

Two Cameroon security sources meanwhile said two of its troops had been killed in the Sambisa Forest, although it was not clear if they were among those mentioned by Usman.

Boko Haram has been fighting to establish a hardline Islamic state in northeast Nigeria since 2009. The violence has killed at least 20,000 and displaced more than 2.6 million.

Nigeria's President Muhammadu Buhari, a former military ruler who is expected to seek a second term of office next year, was elected in 2015 on a promise to defeat the insurgents.

He and his senior military commanders have repeatedly insisted the Islamic State group affiliate is a spent force but regular attacks still occur in the remote region.

The Nur faction, which goes by the name Islamic State West Africa Province (ISWAP), last Friday claimed a late December raid on a Nigerian military base that killed nine soldiers.

Shekau appeared in a new video last Tuesday and claimed a series of recent attacks in the Borno state capital, Maiduguri, and the border towns of Gamboru and Damboa.

Ethiopia says army in control of Tigray capital as more rock...
35 minutes ago