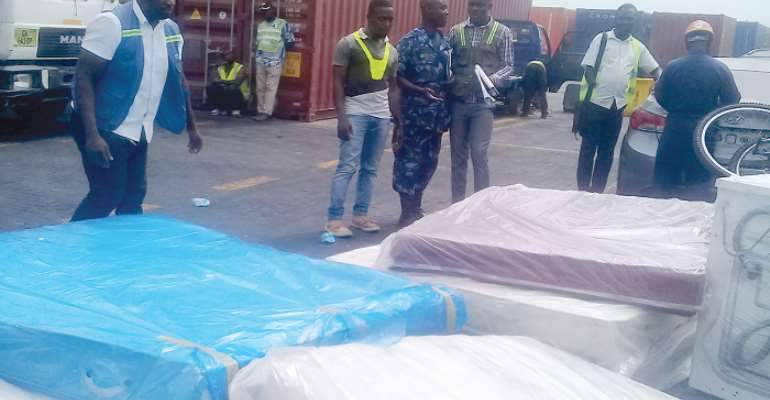 Shipping agents captured negotiating a deal with a customs official.

A scheme comprising officers at the Customs Division of the Ghana Revenue Authority (GRA) and rogue importers are taking advantage of a lousy import ban on used mattresses to ship the product through the noses of law enforcers into the country.

Buoyed by the hot demand for the product and the high returns, the smugglers, mostly importers of cars and spare parts, have managed to develop strong ties with some custom officers , National Security officials and Ghana Port and Harbours Authority (GPHA) security officers to help make their activity conducive.

A GRAPHIC BUSINESS (GB) investigation uncovered that the Jubilee Terminal at the Tema Port has become porous and a safe haven for this illegality although the customs division says smuggling has mainly been made through undesignated entry points on the country's borders, mainly inland.

As a result of the indulgence of the security officials in the smuggling syndicate, GB observed during the undercover investigation that, piles of mattresses arrive in shipping containers daily at the terminal and are subsequently cart away in mini trucks without any resistance from the security officials.

Beyond flouting the ban, the influx of the used mattresses through the Tema Port denies the country billions of Ghana Cedis in revenue, as importers are not charged duties on the import of the banned product.

After getting the licences for the importation of cars and spare parts from countries such as South Korea, United States of America and Canada, the importers, through the aid of the GRA officers, divert the original use of the licence to be able to indulge in the dark trade of importing these banned mattresses.

The mattresses are concealed in either cars or spare parts in shipping containers.

When these consignments arrive at the Tema Port, officials from the Customs Division of the GRA, who are part of this scheme but in charge of preventive services at the Jubilee Terminal of the Port, grant permission for the banned goods to be transported onto the market without any interference. Smuggled used matresses being packed into waiting trucks

Ineffective ban
The government, through a Legislative Instrument (LI 1586) of 1994, placed a total ban on the importation of used mattresses and other used products from entering the country, citing health concerns.

The ban on used mattresses was also meant to allow local manufacturers to gain access to a larger market and expand their operations to create jobs for the unemployed.

However, importers of used mattresses are rather benefiting from the ban and are making huge profits from sales because they don't officially declare the items and thereby skip payment of import duties on them.

In some commercially vibrant suburbs of the capital, such as New Town, Lapas, Kaneshie, Achimota etc.,trucks loaded with used mattresses, are offloaded in the wee hours of the morning by smugglers who then distribute to traders around the city.

Most of the mattresses find their way to traders in various parts of the capital, but according to sources who spoke to the paper in an interview; used mattresses had literally flooded the market in major towns across the country.

Although illegal, the local market has remained attractive for suppliers of used mattresses who have continued to knock on the country's doors, notwithstanding the resistance from local authorities.

GRA's response
The acting Commissioner of the Customs Division of the GRA, Mr Isaac Crenstil, speaking in an interview with the GRAPHIC BUSINESS on January 5, on the upsurge of used mattresses inundating the market with the help of some customs officials, said the smuggling of used mattresses was a criminal offence which the GRA was currently working in collaboration with other agencies to clamp down.

“We are not taking such practices lightly at all and presently we are embarking on a special operation to fish out such corrupt officials aiding the trade for prosecution and dismissal,” he added.

In spite of his claim, it is ironic that personnel from his outfit who are supposed to aid the exercise were deeply involved in the multimillion Ghana cedi trade.

An insider in the syndicate that imports and smuggles used mattresses, speaking to the paper on condition of anonymity, said: “Though smuggling through undesignated entry points is more problematic, it's not beyond Customs capacity to curb.”

“It requires a more concerted national effort and political will to eliminate that kind of smuggling but smuggling through the Tema Port with such impunity and with help from security officials is nothing but a shame,” she added.

Meanwhile, the source told the paper that some customs officials, who resisted the illegality, received threatening calls from highly placed officials within the service, ordering them to release the goods at the port once they arrived in the country.