Akuffo Addo Has Deceived Me But Mahama Is Not The Solution! 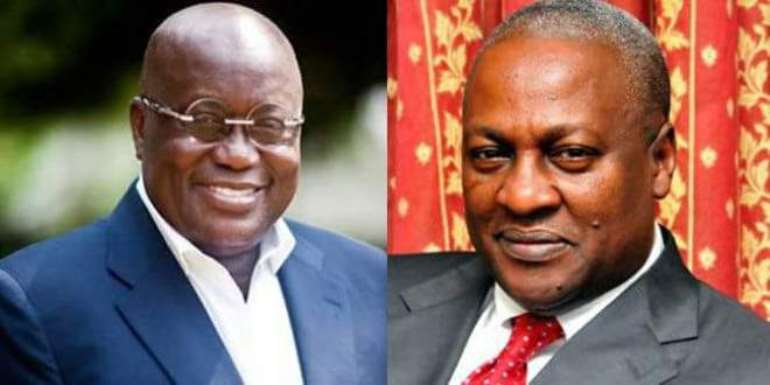 The NPP said they were going to limit the tax burden. Unfortunately, they are taxing us for watching TV. It is not fair! I feel deceived!

Even worse, this deception is not limited to promises on taxes (which has seen fuel prices up, electricity cost up, cost of doing business up, prices of good and services up) but also, they have failed to deliver the promised efficient government, failed to fight corruption, failed to clean Accra, failed to provide jobs, failed to fight winner takes all, failed to fight the politics of family and friends.

Even most sad, crime is on the increase, the health situation is deteriorating and unemployment is high at a time government is spending more on the luxury of the presidency by doubling its budget and inflating high profile political contracts.

The solution is not a return of John Dramani Mahama, who is the best candidate among the NDC’s mediocre presidential line up.

What will John Mahama do differently, aside awarding what is left of Ghana to his brother and the rest of his northern folks and to consolidate his wealth as Akuffo Addo seems to be busily doing?

Unfortunately, Ghana does not have a parliament to check Executive excesses. We have a house of hungry men and women lobbying for their share of the loot. While Majority MPs want to become ministers, the minority are busily taking bribes to approve corrupt ridden contracts.

As for the judiciary, if we indeed have one, they are occupied with election petitions, impeachment of EC and setting up special courts to jail Ghanaians who refuse to pay tax for watching TV. What a shame!

The media could have been of help if not for the fact that they are just doing news paper reviews and calling politicians to clarify their press releases. They will rather fight for ‘soli’, fight among themselves, fight for politicians who are criticised, than fight for the poor Ghanaian (who is doing galamsey because of illiteracy, unemployment, bad government policy, foreign mines taking over their lands and destroying farms and rivers with cyanide).

Ghanaians, the solution is in your hands. You are on your own.

President Akuffo Addo is too old to see the implications of his actions. To be 75 and alive is a miracle in Africa. His ministers even realize that . That is why they have started looting the state and fighting among themselves for appointments from day one. They could not wait, knowing the president is too old to last.

We must not allow partisanship to destroy us. We must fight for our share of the nation’s resources.

We still have our children and grand children to take care of.

We must not allow these greedy elites to sign off our entire heritage to foreign interest as their retirement package.

Where is our oil, where is the gold, diamond and state enterprises?

ECG, ADB and Ghana Water Company are almost sold.
Very soon they will sell us, the citizens like they are selling the state lands.

We must not trust the civil societies. They are either protecting the corruption of government or campaigning for the opposition.

We must individually burry our selfish interest and collectively without partisan lenses force our leaders to think and work in our interest .