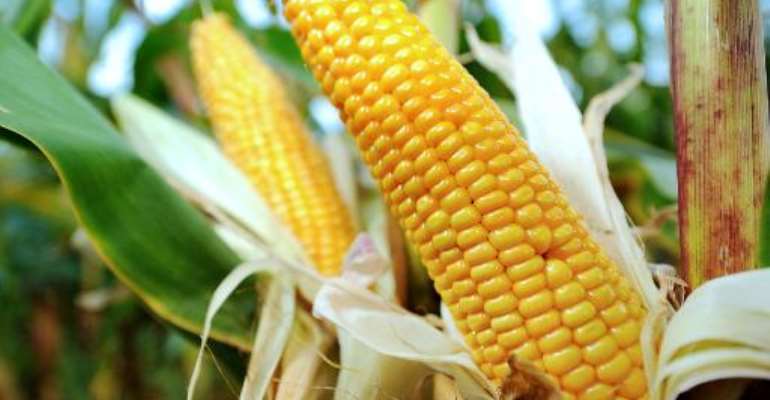 The Brong Ahafo Region has so far recorded over 1,600 metric tons (32,156 bags) of maize being part of the harvest under the Planting for Food and Jobs (PFJ) campaign which was launched by President Akufo-Addo in April last year at Goaso.

This success has been chalked in spite of the invasion of some maize farms across the country by armyworms last year with some analysts predicting a shortfall in maize production in 2017/2018 farming season even when the government said it had brought the situation under control.

At the moment, the warehouse in Sunyani is full to the brim, compelling authorities of the National Buffer Stock Company Limited to create an additional space to store extra 3,000 metric tons of maize with some indications that a lot more farmers in the region are waiting impatiently to sell their produce to the buffer stock company for storage.

This is in line with the arrangement made between the Ministry of Food and Agriculture and the farmers ahead of the implementation of the Planting for Food and Jobs campaign which has now provided ready market for the farmers and at the same ensured food security.

Officials of the National Buffer Stock Company say their warehouse at Badu in the Tain district is already full with about 10,000 bags of maize while the other warehouse at Wenchi is also stocked with over 20,000 bags of the commodity.

All the various farm produce being stored in the various warehouses across the country would be sold to caterers of the National School Feeding Programme while part would also go the various public Senior High Schools as part of the Free SHS policy.

Deputy Minister of Agriculture, George Oduro, was in Sunyani recently to acquaint himself with the operations of one of the warehouses located close to the Mandela Restaurant in Sunyani and also to learn at first hand some challenges facing workers there.

He was accompanied by the Brong Ahafo Regional Director of MOFA, Dr. Cyril Quist and some other officials of the ministry.

Briefing the media after his rounds, the Deputy Minister expressed satisfaction about the operations of the warehouse saying, “so far figures being collated in the region indicate that the government is most likely to exceed its target of 30% increase of maize production under the PFJ and I am very happy about that.”

He said the warehouses being used currently were in existence already and they were refurbished to function properly while the government had also awarded contracts for the construction of 1,000 metric tons capacity warehouses in each district and that work is on-going on most of them.

Mr. Oduro, who is also the Member of Parliament for New Edubiase, said when completed, more space would be created to accommodate the bumper harvest that would be expected.

The Regional Director of MOFA, Dr. Cyril Quist, for his part said about 21,000 farmers in the region were engaged under the Planting for Food and Jobs programme and hoped that the figure would rise as more farmers are expected to be part of the campaign in the next planting season.

Dr. Quist said there were additional storage facilities at Badu in the Tain District and Wenchi which were also stocked with several metric tons of maize.

On preparations for this year’s planting season under the Planting for Food and Jobs campaign, Dr. Quist said the number of farmers under the programme is expected to go up this year considering the huge success recorded last year.

The Region recorded about 21,000 farmers under the programme last year.