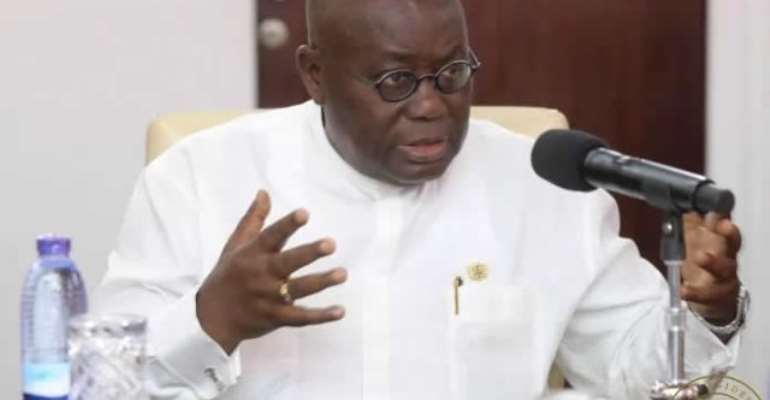 STATEMENT BY THE PRESIDENT OF THE REPUBLIC, NANA ADDO DANKWA AKUFO-ADDO, AT THE SILVER JUBILEE CELEBRATION OF THE 4TH REPUBLIC, ON SUNDAY, 7TH JANUARY, 2018, AT THE INDEPENDENCE SQUARE, ACCRA.

Let me begin by recalling that, on this auspicious day, three of our number are not with us. I refer to the late Prof. John Evans Atta-Mills, the 3rd President of the 4th Republic, who died in office, the first President to do so in our history; to the late Kow Nkensen Arkaah, former Vice President; and also to the late Alhaji Aliu Mahama, former Vice President. I entreat you, respectfully, to stand up, and observe a minute’s silence in their memories, in recognition of their services to the nation. May their souls rest in perfect peace!

Today, 7th January, 2018, is exactly 25 years since the Constitution of the 4th Republic came into force, and the 4th Republic duly inaugurated on 7th January, 1993, i.e. its Silver Jubilee. The Constitution became effective, following the decision of the Ghanaian people, given in overwhelming numbers, to adopt it as the fundamental law of the land in the Referendum of 28th April, 1992. The vote was three million, four hundred and eight thousand, one hundred and nineteen (3,408,119), representing 92.59%, in favour, with two hundred and seventy two thousand, eight hundred and fifty five (272,855) against, i.e. a mere 7.41%. It was, thus, promulgated with immense, popular backing, and, on that seminal day, His Excellency Jerry John Rawlings was sworn into office as the 1st President of the 4th Republic.

Indeed, on that same day, the 1st Parliament of the 4th Republic was convened. Since then, we have had six more Parliaments, and under the leadership of successive Right Honourable Speakers – Justice D.F. Annan, Peter Ala Adjetey, Ebenezer Sekyi Hughes, Justice Joyce Bamford-Addo, Edward Doe Adjaho, and, currently, Prof. Aaron Mike Oquaye – Parliament has grown stronger in stature, and in its contribution to good governance.

In ensuring that the commitment made twenty five years ago to embark on the journey of multiparty democracy resounds strongly, one of the most important actors in the preservation of this has been the Judiciary. Today, I pay tribute to their Lordships Philip Archer, I.K. Abban, E.K. Wiredu, George Acquah, Georgina Wood, and, the incumbent, Sophia Akuffo, the Chief Justices of the 4th Republic, who have ensured, and are still ensuring that the Judiciary plays its role as the defender of the rights and liberties of the people, and as an independent arbiter, which aims to inspire confidence in the citizenry.

We remember with gratitude the contribution of the Council of State, under its various leaders – Alhaji Mumuni Bawumia, Prof. Alex Adum Kwapong, Prof. Daniel Adzei Bekoe, Prof. Kofi Awoonor, Madam Cecila Johnson, and the current chair, the respected traditional ruler, Juabenhene, Nana Otuo Siriboe II – in helping to steer the ship of state to this happy day. We say the same to past and current officials in the public service, and to the active and retired members of the security services – the Armed Forces, the Police Service, the Fire Service, the Immigration Service, the Prisons Service – who have played their part in helping to preserve the security of our society, and the stability of our nation. This survey cannot be complete without mention of the Electoral Commission (EC), National Commission for Civic Education (NCCE), Commission for Human Rights and Administrative Justice (CHRAJ), political parties, trades unions, civil society organisations, traditional authorities and religious bodies in the success of the 4th Republic.

We have certainly come a long way, and this period of democratic rule has seen some important developments. We have experienced the longest, uninterrupted period of stable, constitutional governance in our history, banishing the spectre of instability that disfigured the early years of our nation’s existence, and the benefits are showing. We have witnessed sustained growths in the size of the economy; rising levels of per capita real incomes; systematic expansion of the private sector; taken strong measures to try to protect our lands, water bodies and environment from the menace of environmental degradation; ensured that efforts to meet the most basic elements of social justice, i.e. education from kindergarten through to secondary school, and accessible healthcare to all our citizens, are ongoing; recorded significant reductions in maternal mortality rates; entrenched media freedom; deepened attachment to the rule of law, probity and accountability, respect for individual liberties, human rights, the principles of democratic accountability and social justice; and created an environment in which government and regulatory policies attempt to enhance, rather than inhibit or frustrate, trade, commerce and investments.

Democracy, equality of opportunity and respect for human rights, ideals which have stood the test of time, have now found firm anchor in our body politic. We have had 5 Presidents in the history of this Republic – their Excellencies Jerry John Rawlings, John Agyekum Kufuor, John Evans Atta-Mills, John Dramani Mahama, Nana Addo Dankwa Akufo-Addo – with peaceful transfers of power from a governing to an opposition party on three separate occasions. Even when there was disagreement with the outcome of an election, it was the Supreme Court, rather than the streets, that determined its result.

Your Excellencies, esteemed clergy, ladies and gentlemen, despite all these gains, we must acknowledge that we have not reached the potential we should have. The biggest challenge we face continues to be eradicating widespread poverty. We still have challenges in the performance of our public services; we face threats, traditional and contemporary, to our nation’s security and social stability, in the form of chieftaincy conflicts, land disputes, ethnic conflicts, vigilantism, cyber security issues, youth unemployment, economic hardships, and corruption in our public life.

But the fundamental commitment to resolving these challenges, within a framework of due process, must be unshaken. Primarily, we have begun to take a deep look at the structure of our economy, and transform it, from a raw material producing and exporting one to a value-added, industrialised economy, with a modernised agriculture, to serve better our needs. The era of Ghana’s industrialisation has dawned, so that we can trade in the global marketplace, not on the basis of raw materials, but on the basis of things we make, inspired by our sense of enterprise, creativity and innovation. It is the most effective way we can generate jobs and wealth for the masses of our people, and join the ranks of the developed, prosperous nations of the world.

Through it all, our obligation to the unity and integration of the region and continent remains intact, in pursuit of our historic pan-African vocation. Achieving functioning, common regional and continental markets will help consolidate the process of structural transformation of our economy, on which we are engaged, and will, thus, help open up the space for accelerated development.

Our goal has to be constant – to fulfil the hopes and aspirations of Ghanaians, who yearn for improvements in their living standards, in conditions of peace, security and solidarity, and to put Ghana onto the path to sustained progress and prosperity. We can hope for a brighter future, because we are blessed with enormous wealth and human potential.

We commend the erstwhile Provisional National Defence Council (PNDC), the 1991 Consultative Assembly, the Movement for Freedom and Justice (MFJ), the pro-democracy organisations, civil society and religious bodies, whose collective efforts and agitations led to the birth of the 4th Republic.

But today’s celebration, above all, Your Excellencies, esteemed clergy, ladies and gentlemen, is to the great credit of the Ghanaian people, the ordinary men and women who make up the fabric of the Ghanaian nation. 25 years ago, the Ghanaian people resolved to build, under God, a united nation, grounded in democratic values and the rule of law. We have gone a long way towards realising it, and I am confident that, with a spirit of reconciliation, fairness, integrity and hard work, the best days of Mother Ghana lie ahead of us. Together, we are laying the platform for the evolution of a new Ghanaian civilisation, which will give true meaning to the foundational values of freedom and justice on which our nation was conceived.

Long live the 4th Republic! Long may it flourish!
Thank you, and may God bless us all and our homeland Ghana, and make her great and strong.