No One Is Scared Of Special Prosecutor--John Mahama 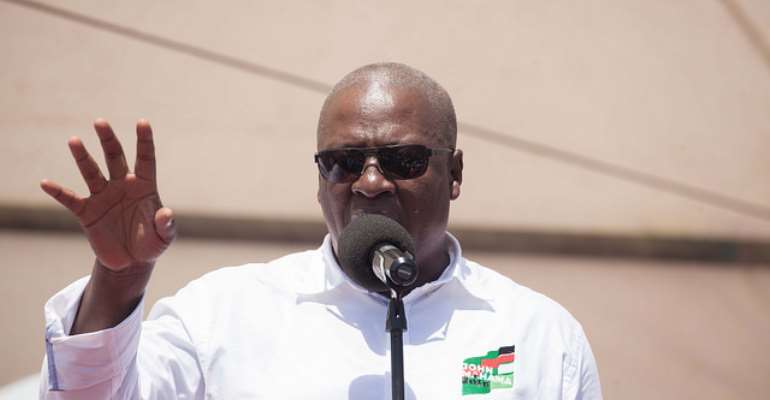 Former President John Dramani Mahama has said members of the opposition National Democratic Congress (NDC) are not scared of the Office of the Special Prosecutor despite the threats by some political commentators that the office will jail many appointees of the former government for allegedly indulging in corruption-related activities.

“We the members of NDC are not scared –whether Special Prosecutor, Attorney General or state Attorney, we are not scared,” he said during a Unity Walk hosted by the NDC at Techiman in the Brong Ahafo Region on Saturday.

President Akufo-Addo last week signed into law the bill setting up the Special Prosecutor office after it was approved by Parliament in November 2017.

The Office of the Special Prosecutor marks the fulfillment of a major campaign promise of Nana Akufo-Addo in the run-up to the 2016 elections aimed at fighting corruption.

But members of the opposition NDC have complained that the office, which the president is yet to name someone to head, cannot be independent since the Special Prosecutor will certainly be appointed by President Nana Akufo-Addo.

Speaking at the Unity Walk, Mahama further reiterated his call on NDC members to support his appointees who are hauled before the Special Prosecutor.

He also advised NDC members not to pass premature judgment on their colleagues who are arraigned before the Special Prosecutor.

“We the NDC members should not pass judgment on our colleagues because they are deemed innocent until they are proven guilty in a court of competent jurisdiction. So as long as they have not been proven guilty it is our duty to show them some solidarity and make sure that at least they have proper legal representation,” he added.

Not even Nana Addo can control Special Prosecutor – Freddie Blay

Acting Chairman of the governing NPP, Freddie Blay had earlier allayed fears that the Special Prosecutor will not be independent saying not even the President will be able to meddle in the affairs of the office.

“It will not be subject to any control by anybody, not even the president's office, and that is what the president has decided to happen,” he added.