Highlights Of Major Political Events In 2017 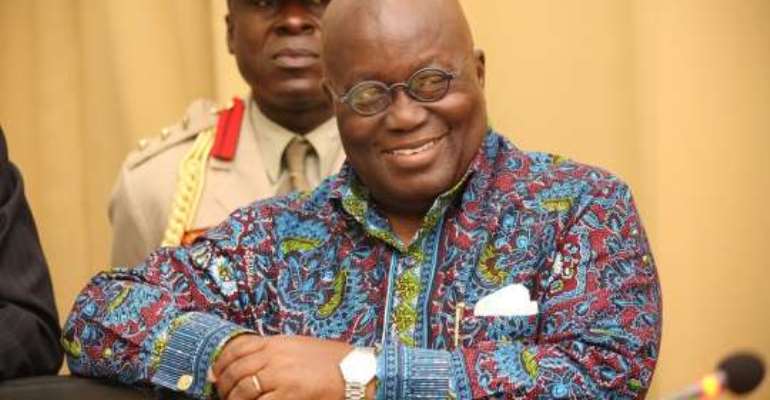 The President-elect needs the support of all - Dormaahene

While commending President John Dramani Mahama for magnanimously conceding defeat in the Election 2016, he urged Ghanaians to avoid the politics of insults.

Osagyefo Agyemang-Badu made the appeal when he addressed an annual get-together for the divisional, sub-chiefs and their elders of the Dormaa Traditional Area.

Accra, Jan 4, GNA - It was a delightful scene to watch; and a plus to Ghana's democracy, when President John Dramani Mahama conducted President-elect Nana Addo Dankwa Akufo Addo, round the Flagstaff House, as part of the transition exercise.

The meeting at the Presidency was at the behest of President Mahama, whose objective was to introduce his successor to the various Departments and Offices at the Flagstaff House, the seat of Government, at Kanda.

President Mahama addresses Parliament on State of the Nation

Accra, Jan. 5, GNA - President John Dramani Mahama, Thursday, expressed gratitude to God for the grace to govern, and to the good people of Ghana for the opportunity given him to serve the country in the highest office as President.

He also thanked the Vice President, Paa Kwesi Bekoe Amissah Arthur, the Chief Justice, Georgina Theodora Wood, and all Members of Parliament for their co-operation and solidarity during his tenure as President, as he delivered his last State of the Nation Address to Parliament.

Accra, Jan. 7, GNA - Thousands of Ghanaians thronged the Black Star Square to witness the inauguration of the President elect, Nana Addo Dankwa Akufo Addo as the fifth President of the Fourth Republic of Ghana.

Dressed mainly in the National colours of red, gold, green and black, as well as the New Patriotic Party's colours of blue, white and red, the celebrants expressed their joy of living to witness this all important occasion.

Accra, Jan. 7, GNA - Nana Addo Dankwa Akufo Addo was at 1100 hours on Saturday, January 7, sworn in as the fifth President of the Fourth Republic of Ghana, taking over from the National Democratic Congress' John Dramani Mahama.

Accra, Jan. 07, GNA - Dr Alhaji Mahamudu Bawumia, was on Saturday, sworn in as the Vice President of Ghana of the Republic of Ghana at 1055hrs, succeeding Dr Paa Kwesi Amissah- Arthur, who served with President John Dramani Mahama.

Professor Ocquaye sworn into office as Speaker
Accra, Jan. 07, GNA - Parliament, on Saturday morning, endorsed the election of Professor Aaron Mike Ocquaye, a former Deputy Speaker of Parliament, as Speaker of the Seventh Parliament of the Fourth Republic.

He subscribed to the Oath of Allegiance and Speaker's Oath, administered by Chief Justice Georgina Theodora Wood.

Accra, Jan. 9, GNA - President Nana Addo Dankwa Akufo-Addo, on his first working day at the Flagstaff House, was presented an interim transition report by the Government's side of the transition team.

The report, covering 24 sectors of the economy, was an Executive Summary of matters that the transition team dealt with in the course of their work.

The Former Ghanaian President, who handed over power to President Nana Addo Dankwa Akufo-Addo, on Saturday, January 7, had been asked to continue his mediation role in the effort to resolve The Gambian political crisis.

ECOWAS mediators to meet Jammeh again
Accra, Jan. 10, GNA - ECOWAS Mediators in the political situation in The Gambia, Nigerian President Muhammadu Buhari and his Co-Mediator, former President John Dramani Mahama, were scheduled to meet and hold another round of talks with President Yahya Jammeh.

Information available to the Ghana News Agency indicated that the decision was announced by Nigeria's Foreign Minister at the end of a day's meeting in Abuja, Nigeria, on Monday.

Ghana, he said, needed to work for everybody and that nobody must be made to feel harassed or persecuted.

Accra, Jan. 16, GNA - President Nana Addo Dankwa Akufo-Addo, on Sunday, thanked God for His sustenance for the nation, rallying the prayers of Ghanaians to ensure the success of government to fulfil its promises.

Extolling the virtues of patience and the benefits of waiting confidently on God, President Akufo-Addo referred to the bible, saying: "The Lord is good to those who wait on Him, to the soul who seeks Him, it is good that one should hope and wait quietly for the salvation of the Lord", as he joined the congregation of the Ridge Church, in a Thanksgiving Service, in Accra.

Accra, Jan. 17, GNA - The Government announced that King Mohammed VI, of the Kingdom of Morocco would begin an official visit to Ghana from Wednesday, January 18.

A statement issued in Accra, on Tuesday, by the Office of the President, and signed by Mr Eugene Arhin, Acting Communications Director, said the visit was aimed at deepening cordial relations between Ghana and Morocco.

Accra, Jan. 19, GNA - Ghana deployed troops to support the ECOWAS mission to the Gambia, seeking to enforce the mandate of that county's December 1, 2016 elections, as defiant President Yahya Jammeh refused to cede power after losing at the polls.

A statement issued by the Office of the President in Accra, on Wednesday, said President Nana Addo Dankwa Akufo-Addo, had approved and authorised the deployment of a combat team of two 205 troops, backed with the appropriate logistical equipment, to the Islamic Republic of The Gambia as part of the ECOWAS Mission in that country.

ECOWAS; AU must go to the Gambia's rescue - Survey

Accra, Jan. 21, GNA - The tempestuous aftermaths of the elections in The Gambia resulted in uncertainty among some Ghanaians amidst calls on the African Union and ECOWAS to intervene.

The ex-leader, Yahya Jammeh's adamant insistence on holding onto, even after the President-elect, Adama Barrow, had been sworn-in, caused many to doubt the ability of the country to sustain the peace; thus the general call on the leaders of the continental and Sub-regional bodies to help normalise the situation.

This was in furtherance of the New Patriotic Party (NPP's) long-held campaign pledge to build a database of Ghanaians and other nationals resident in Ghana.

At a broad consultative meeting, chaired by the Vice President, Alhaji Dr Mahamudu Bawumia, in Accra, all the major stakeholders underscored the need to have a single national database to aid policy planning and implementation.

The Committee, which had just six weeks to plan the event, was chaired by Mr Ken Amankwah, a media and public relations consultant, and a former Deputy Director-General of the Ghana Broadcasting Corporation.

At a ceremony to swear in 12 Ministers of States, the President said: 'The Ghanaian people want honest governance, they want a government that will protect the public purse and ensure value for money in all public transactions…We cannot fail them…we must not fail them.'

Mr Quartey, with the backing of President Nana Addo Dankwa Akufo-Addo, was elected to that position at the Ordinary Session of the 28th Assembly of the African Union at Addis Ababa, Ethiopia.

Accra, Jan. 30, GNA - President Nana Addo Dankwa Akufo-Addo, called on the new Secretary-General of the United Nations, AntÃ³nio Guterres, to champion reforms at the UN that would promote and deepen international cooperation.

President Akufo-Addo said it was important that during Mr Guterres's tenure of office, he ensured the implementation of reforms of the UN Security Council and all other organs of the international body.

Accra, Jan. 31, GNA - President Nana Addo Dankwa Akufo-Addo, Tuesday, asked African leaders to leave better legacies than their forebears, saying: 'our generation must be at the measure of Africa's history.'

He said the African Union's (AU) theme for 2017: 'Harnessing the demographic dividend through investments in the Youth is essentially a pact leaders on the Continent have made with both the present and future generations, to leave them a better legacy than we inherited from our forebears'.

NPP grateful to God for Election Victory
Effia (W/R), Jan. 31, GNA - The Acting Chairman of the ruling New Patriotic Party (NPP), Mr Freddie Blay, said God was on the side of President Nana Addo Dankwa Akufo-Ado to make him one of the best presidents that a nation could ever have.

'Some people in this country never believed that Nana Addo could become the President, but God has proven them wrong and I still believe that the battle ahead has been won already by the help of God," he said.