Our Laws Must Be Respected By Even Chinese Investors 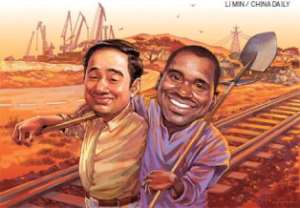 I was elated to read the news item in which a Chinese-owned tomato-processing plant was ordered to cease and desist from its illegal activities in the Kuntunse township of the Greater-Accra Region by Prof. Kwabena Frimpong-Boateng, the Minister of the Environment, Science and Technology. I was elated because we learn that the proprietor and operatives of the factory had put their business and economic interests ahead of the health concerns of the residents of the area. When I think of Kuntunse, I think of the Hilla “Babini” LimannAdministration and the installation of the first satellite communications system in Ghana and, perhaps, the globally fabled wedding between Prince Charles and Princess Diana, late. That was in 1979 or 1980, or thereabouts.

As well, we are told that as far back as August of last year, the operators of the aforesaid tomato factory had been fined GH₵ 15,000 and ordered to halt their activities (See “Chinese Tomato Factory at Kuntunse to Be Shut Down” Citifmonline.com / Modernghana.com 1/5/18). Such recalcitrance or adamancy and flagrant disrespect of our laws and bylaws, obviously have a lot to do with the nihilistic nose-thumbing policies of the Mahama-led government of the National Democratic Congress (NDC), and before the latter, the Atta-Mills-led regime of the National Democratic Congress. This reckless state of affairs is very disturbing because the last time that I checked, the country was supposed to have industrial zoning laws vis-à-vis the siting of factories and manufacturing plants.

That the operators of the Chinese-owned tomato factory would defy the order of the Environmental Protection Agency to cease and desist, says a lot about the abject extent to which Ghanaians have ceased being a nation of self-respecting citizens. Matters are not abated by allegation that the Municipal Chief Executive Officer (MCE) of the Ga-West Municipality has actually been in cahoots with these expatriate scofflaws. It is imperative for the Greater-Accra Regional Minister, working in concert with the EST Minister, to investigate this matter and take the appropriate disciplinary action with promptness, including the possible removal of the MCE, if the strength of the evidence points in such direction, of course.

By all means, let us heartily welcome all entrepreneurs who are interested in helping our country develop economically, no matter where they may come from; for there can be no gainsaying the fact that we are in dire need of jobs as a nation. But equally important is the fact that the provision of such jobs must come with sensitivity to the health and well-being of the inhabitants and residents of the host nation. I am here making an exception of Chinese entrepreneurs in the caption of this column, because the Chinese have gained notoriety in the environmentally destructive activities of Galamsey or illegal mining. I am quite certain that there are other non-Chinese expatriate entrepreneurs who are also flouting our laws and regulations with impunity.

And, by the way, speaking of wrongly sited tomato factories, this story set me thinking about one of my own ancestral townships, Nsawam-Adoagyiri where, for some time now, Chairman Jerry John Rawlings and his wife and Ghana’s longtime First Lady, Nana KonaduAgyeman-Rawlings, have been illegally occupying the prime landed properties of some of my relatives and making life a living hell for these poor and defenseless inhabitants. I wish the Akufo-Addo government could promptly investigate this matter and let justice prevail. The primitive and benighted era of Social Darwinism must be swept behind us and into the forgotten past.