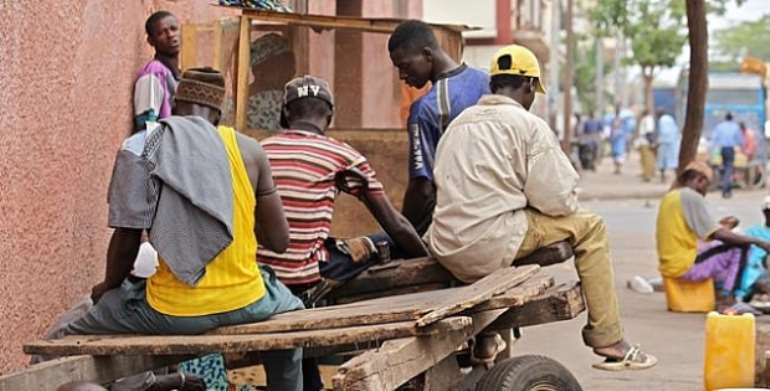 A security analyst, Professor Vladmir Antwi Danso says the growing number of unemployed youth in the country poses a threat to national security.

He said the government must depoliticize its job creation policies in order to ensure that the country does not risk breeding criminals through the neglect of jobless youth.

His comment was in reaction to the exponential increase in the number of applicants for this year's recruitment exercise of the Ghana Immigration Service.

From about 40,000 applications in the previous year, over 84,000 persons applied for this year's recruitment exercise.

Many have attributed the increase to the high levels of unemployment in the country.

Prof. Antwi Danso said the developments from the Immigration Service recruitment was “an indication that the unemployment situation in Ghana is very dire and serious.”

“Nobody should think of it in political terms. This is purely a socioeconomic problem which should be solved by the politician,” he said.

“Serious numbers like this in their youthful age between the ages of 20 and 35, unemployed become a hot magma from which all kinds of vices can be mined. If there is the chance for indulging in anything unconstitutional they will do it because they have to survive and that is how you look at it when security is concerned… For me it is a big security problem,” he added.

Prof. Antwi Danso, chided successive policy makers for giving too much emphasis to the political implications of job creation program rather than the socio-economic benefits.

He also called for the restructuring of the National Development Planning Commission (NDPC) into an apolitical organization that must focus on researching and bringing to the fore all that challenges within the country that must be addressed.

“Policymakers over the years have always looked at the political dividend which is very unfortunate. We need to look at the socioeconomic dividend. The National Development Planning Commission should be made an apolitical commission filled with technocrats who will do their research and know the deficits we have in the country and plan. So politicians will go to the NDPC before they draw their manifestos,” he said.

While arguing that the government must make unemployed youth the targets for its programs, including the flagship 1 District 1 Factor, Prof. Antwi Danso said “the government must think about how to absorb these youth into programs that yield results so that for those results people are paid.”