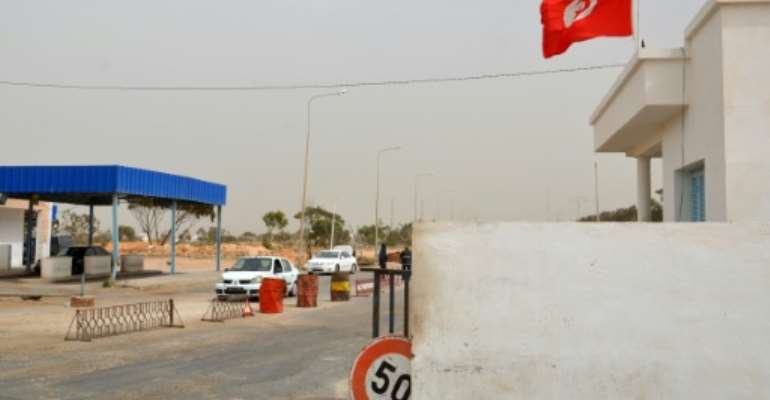 A view of the Tunisian customs post at the Ras Jedir border crossing with Libya in 2016. By FATHI NASRI (AFP/File)

Armed groups clashed Friday in western Libya, forcing the closure of a key border crossing with Tunisia, an official and a military commander said.

The clashes took place near the Ras Jedir border post, the main crossing between western Libya and southeastern Tunisia.

The crossing has been controlled by militias from the western port city of Zuwara since the fall of longtime dictator Moamer Kadhafi in 2011 in a NATO-backed revolt.

On Friday, a force set up by the country's United Nations-backed unity government to stabilise Libya's west attacked in a bid to seize the crossing, said an official from Zuwara who asked to remain anonymous.

Speaking to Libya's 218TV, he argued his forces had a mandate from the unity government to secure the region, but did not specify whether the operation was coordinated with authorities in Tripoli or not.

The border post was closed temporarily to "ensure the safety of travellers", he said.

Libya has been wracked by violence since Kadhafi was toppled and killed in 2011.

The unity government has struggled to impose its rule in a country where hundreds of militias hold sway.

The western border region is highly dependent on cross-border trade, both legal and illegal.

They have been accused of involvement in smuggling a vast network smuggling contraband and fuel to Tunisia and Malta.

30,000 Disqualified From Voting On December 7
53 minutes ago