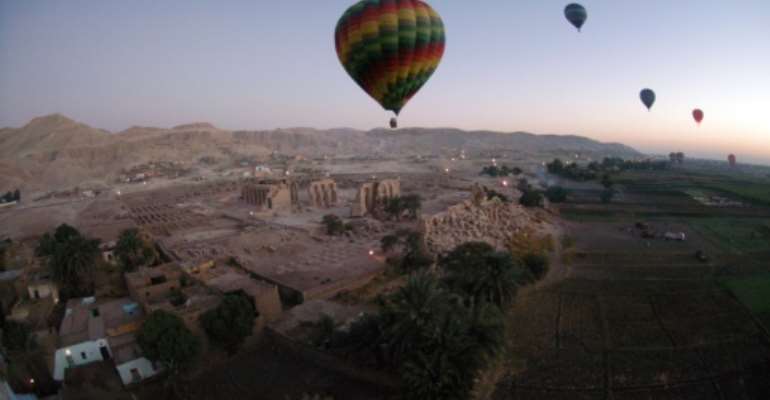 Hot air balloons fly above Egypt's Valley of the Kings, near Luxor in 2007. By CHARLES ONIANS (AFP/File)

A South African tourist was killed and 12 other people were injured when a hot air balloon crashed near Egypt's ancient city of Luxor on Friday, a health ministry official said.

Sharif Wadie, the assistant health minister in charge of emergency services, told AFP there were no other casualties but did not elaborate on the extent of the passengers' injuries.

The nationalities of the injured were not immediately clear.

Egypt's civil aviation ministry said 21 hot air balloons had taken off and landed with no incident on Friday but the one that crashed had landed too forcefully.

Twenty people had been on board, it said, adding that weather conditions had conformed to flight standards.

One of the main attractions is the Karnak temple, which dates back thousands of years. 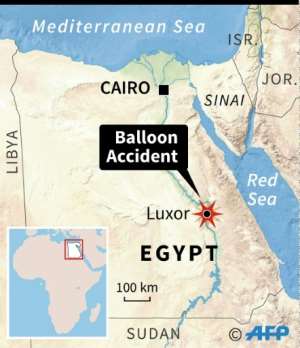 The hot air balloons also offer views of the Valley of the Kings, where pharaonic nobility were buried.

The government had previously suspended the rides after two crashes in four years.

In 2009, 13 tourists were injured when their hot air balloon struck a communications mast in Luxor and crashed.

In 2013, a hot air balloon caught fire in mid-flight over Luxor, killing 19 tourists. 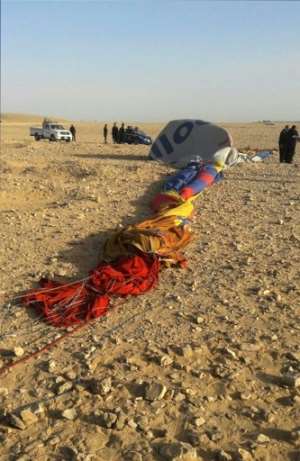 The remains of a hot air balloon are seen on the ground near the ancient city of Luxor after a fatal crash on January 5, 2018

A fact-finding committee later found that the accident was probably caused by a gas leak near the burner, sparking a blaze that spread throughout the balloon.

The tourists, from Britain, France, Hong Kong, Hungary and Japan, died when the balloon plummeted to the ground after catching fire.

The pilot and one tourist survived by jumping from the balloon, officials said at the time.

Friday's accident comes as the government tries to woo back tourists following years of unrest that drove them away.

A jihadist insurgency led by the Islamic State group has targeted tourists, including the bombing of a Russian airliner carrying holidaymakers from an Egyptian resort in 2015 that killed all 224 people on board.