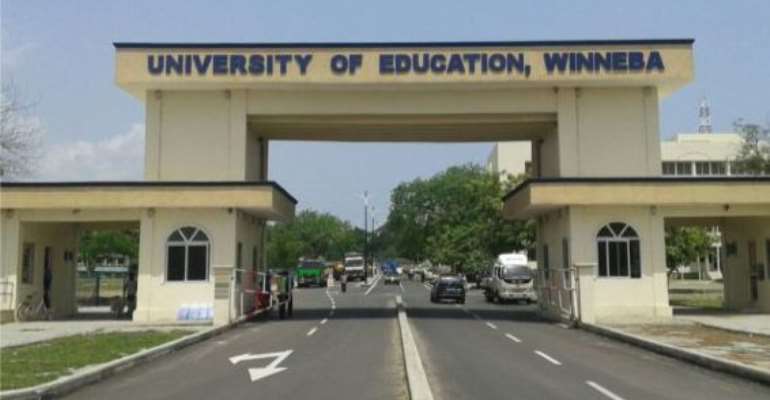 The University of Education started off on a veracious trajectory. It had clambered its way from a low ranked university into becoming one of the fastest and prestigious universities in Ghana and the Sub-region. UEW enticed Fulbright scholars from the United States of America and scholars from Germany, Norway, Australia, Nigeria and other Western nations. Over the years, UEW started full-bodied graduate programs that attracted students from all over. From a single doctorate program, UEW ultimately scaled up other doctorate programs. We have quickly forgotten how these doctorate programs started.

Aful-Broni and Abakah were never part of it, though they were senior “professors”. Predictably, even faculty members from other universities were hastening to attend some of these programs. UEW became the choice for most West African scholars who wanted to go on sabbatical. Some fell in affection with the place and the rigor of academics and decided to permanently stay at UEW to contribute their professional know-how. Progressively, UEW started to develop from a university that hitherto, only had indigenous faculty into a somewhat an international university with a student population of more than 55,000. Professor Avoke was able to lure scholarships from abroad, mentored junior faculty, proactively supported junior faculty to embark on obtaining their terminal degrees

There was no harassment or threat to academic discourse. Faculty was free to engage in vigorous intellectual exchanges. Furthermore, Students were free to question and test faculty without any anxiety of intimidation. No one walked around from classroom to classroom checking the rooster like is done in Primary School. Faculty members were also free to teach and conduct research without being careworn to take sides. UEW was a synergistic unit. Yes, there were some contraventions with regards to how some individuals got promoted. Indeed, some academics should never have gone beyond the title of a Lecturer. On the converse side, some academics were denied promotions because of one reason or the other. Maybe justified or unjustified. Notwithstanding all these illustrations of inequity, there was demureness and veneration among staff.

Now comes the chief Mafia-Sir Afenyo-Markins. Prior to being elected as the MP of Efutu, he unequivocally boasted to his followers that he was going to turn no nugget unturned, to remove a sitting VC, unless, of course, UEW will come to an understanding to set aside a special fund for the people of Efutu. After trying several times to muscle UEW to agree to this diabolical agreement which inexorably failed, he plotted and strong-armed Lackey Supi Kofi Kwayera to embark on contesting the eligibility and authority of a Council appointed and extended by the President of the Republic of Ghana. Mind you, all the tertiary universities were all operating under the same mandate. It is a marvel he did not sue all the universities, polytechnics and colleges in Ghana. With the corrupt Winneba Judge at the control of the train, the plot thickened.

The next swindler in the axis of evil is Abakah. He left UEW as a failed academic. Fortunately, he was appointed as the VC of Jayee College after he retired. Perhaps, Jayee College did not conduct a comprehensive investigation to know that this guy was not a Full Professor and was a failure as an academic. He never nurtured junior faculty. Yes, he had written a few articles in his area of expertise (Fanti and Twi). Unlike Aful-Broni, I should say he did not commit fraud in his publications. A few plagiarisms here and there. But he can be exonerated. Why will a VC resign his position to become a Council Chairman? This alone tells me that the old man was not successful in academics.

The position of a VC is the highest administrative position within the University system. For someone to resign to take a position of a Council Chair at UEW nonplusses me. It whiffs unwholesome and it is gravid with diabolical intentions. Was the Efutu MP in collusion with Abakah to settle hoary scores at UEW? Abakah has now become the resident Mafia of this plantation. He has colluded to bring down the reputation of this noble institution of higher learning. Abakah’s situation can be likened to a Brigadier General in the Army, stepping down to become a Captain at the Aflao border control in order to collect bribe. UEW is now the butt of jokes all over the world and within academic circles. Abakah promised the President of Ghana that he will solve the UEW saga. Rather, he has become the petrol that keeps igniting the flame at UEW.

The third person in this axis of evil is Aful-Broni. His ambition reminds me of Lady Macbeth. He did not get to wear the crown but through the above two Mafiosos, he was fated to be the acting VC. Truth be told, this guy was also appointed by the same Council that Lackey Supi Kofi Kwayera claimed had expired. The question is why pick on others whilst others remain at post. Aful-Broni is the major academic deceit in the history of universities in Ghana. In a jiffy, I will share other publications that he claimed he wrote that were actually written by others. The last paper he actually wrote was his dissertation. Fortunately, in my continuing research to expose him, I discovered that he had a lot of maintenance during his days at Fordham to complete his doctorate degree. In time, I will share his academic experiences at Fordham.

Forlornly, he has turned himself into the welfare, maintenance and security officer on UEW main campus. I recently read that some armed robbers attacked a student in a hostel at the south campus. So, Ag. VC personally went to the crime scene to check things out and recommended light fixtures (Bawah, 2018). In addition, I read he goes from class to class and from office to office to check and conduct loyalty test on faculty members. The questions my learned colleagues are asking are; why do we have Deans of Student Affairs, Heads of Department, Heads of Security, Director of Development, Head of Estate and Head of Maintenance? Forthrightly, is the role of the VC to run UEW as a Junior Secondary School? These three individuals have in a short period managed to run UEW into the abyss. UEW will never be the same.

Moving on, I want to appeal to parents to not waste their time and money sending their children to UEW. You are better off sending them to other universities or colleges. UEW is now a glorified Junior Secondary School, where academic excellence is not treasured. It is being run by three buffoons. One is a bitter old man. The second is an academic scam, who is also a priest that relishes the company of females; and an MP who has no believability but to bring UEW into the crinkles of his bank account. The international university community and Country representatives from various embassies in Ghana are tuned to the state of affairs at UEW.

I may be reached at: [email protected]