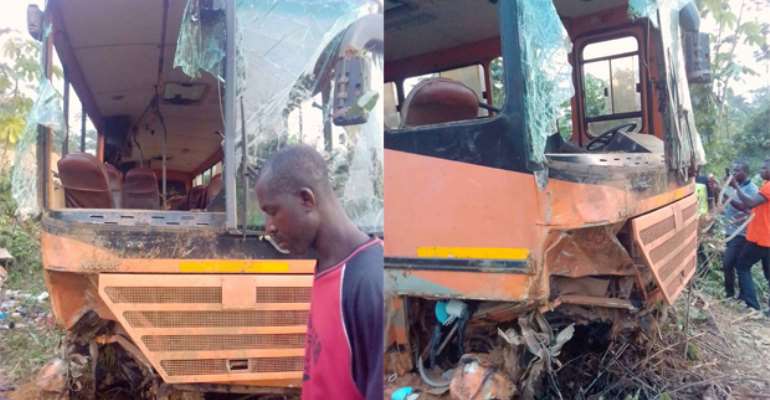 The Bus After The Accident

Two persons died on the spot on Tuesday, January 2, 2018 in a fatal accident on the Enchi-Asankragwaa road in the Western Region.

According to eye witnesses, a Metro Mass Transit (MMT) bus on which the victims were travelling from Kumasi to Enchi was over-speeding and on reaching Yiwabra Nkwanta, one of its tyres got burst.

They asserted that the bus then veered off the road and in the process, hit a tree nearby, killing the two persons instantly.

ASP Olivia Ewurabena Adiku, Western Regional Police Public Relations Officer, told DAILY GUIDE that at about 4:30 pm last Tuesday, the bus, with registration number AW 81-09, was coming from Kumasi in the Ashanti Region and heading for Enchi in the Western Region.

She corroborated the narration of the eyewitnesses and said it was alleged that the driver was over-speeding before the tyre got burst.

ASP Olivia Ewurabena Adiku indicated that two unidentified females died on the spot and other passengers and the driver sustained various degrees of injury.

She added that the injured persons were rushed to the Enchi Government Hospital and were responding to treatment.