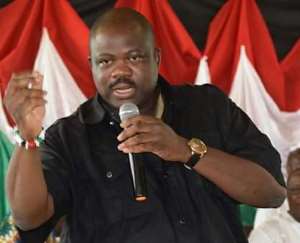 The Outspoken Deputy National Organizer of the NDC, Joshua Hamidu Akamba has assured members of the Opposition National Democratic Congress, that the party has learnt it's lessons after the 2016 electoral defeat and would never again neglect it's Grassroot.

Joshua Akamba made this known in his new year message to his party footsoldiers earlier this morning.

Among other issues raised in the said statement, the Deputy National Organizer of the NDC admonished party members to support the leadership of the party in the reorganization process, adopt branches each and help make the registration exercise very successful.

He further advised party members to at all times, make the Unity of party their top most priority and ensure that whatever they do, will unite the party rather than putting the party into despair.

The Paltry Ghc700 NABCo Salary Is Slavery — US Based Lecture...
1 hour ago