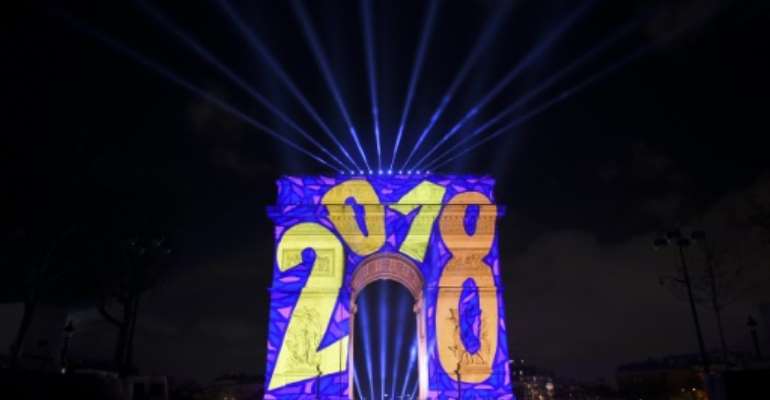 Images are projected on the Arc de Triomphe monument during the New Year celebration in Paris. By GUILLAUME SOUVANT (AFP)

A frigid North America closed out the world's New Year celebrations late Sunday, after a chilly Europe followed Asia and Australasia in nursing a January 1 hangover.

They were subjected to tight security measures, with the "Crossroads of the World" seeing its largest security perimeter in history -- a focus around the world due to fears that crowds could be targets for vehicle and other terror attacks.

Millions gathered on Brazil's Copacabana Beach in Rio de Janeiro to watch not just the traditional pyrotechnics, but also singer Anitta, who gained worldwide recognition through her viral video performance of "Vai Malandra" ("Come on bad girl") in a mini-bikini. 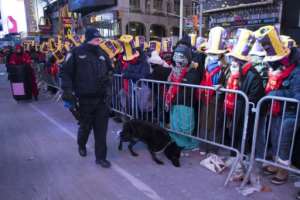 Bikinis were the last thing on the minds of North American revelers, who followed Rio and South America in welcoming the New Year.

Much of the United States and Canada was bundled up to cope with unusually cold weather.

Hader Ghulam, 27, a Pakistani student based in Oklahoma, told AFP he was ready for the cold in Times Square, and felt "pretty safe" given all the security measures.

They were surrounded by police under extra-tight security following two recent Islamic State group-inspired attacks in the city.

Barricades and sand-filled trucks were in place, more than 20 roads were closed, and bomb-sniffing dogs assisted more officers on the ground.

In London, more than 100,000 ticket-holders gazed up at spectacular fireworks from the banks of the River Thames, before dancing to "Auld Lang Syne."

Keeping with tradition, Big Ben in the Houses of Parliament rang in Britain's new year. Although the clock tower is undergoing renovations, the chimes were turned back on especially for the celebrations. 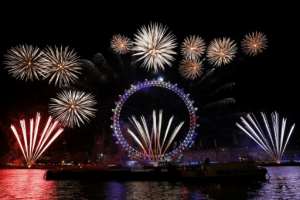 In London more than 100,000 ticket-holders watched a spectacular pyrotechnics display from the banks of the River Thames, before dancing to Auld Lang Syne

In Britain, despite the capital being hit by four terror attacks in 2017, Scotland Yard said it had fewer police officers on the streets of London than during last year's event.

Meanwhile, tens of thousands of people participated in Edinburgh's Hogmanay celebrations -- one of the world's biggest street parties.

Other European cities were similarly awash with crowds despite the winter cold.

In Paris, hundreds of thousands of partygoers braved a storm warning and drizzle to line the Champs-Elysees avenue before a dazzling light show and a fireworks display lit up the Arc de Triomphe.

Nearly 2,000 security forces were deployed to protect the crowd -- out of about 140,000 mobilized nationwide to guard against the jihadist threat which authorities describe as "still high".

"Life goes on and they (jihadists) are on the retreat," said one reveler, who gave his name only as Stephane.

In Berlin, special tents were set up at the Brandenburg Gate to assist female victims of sexual harassment, following mass assaults on women in Cologne two years ago. 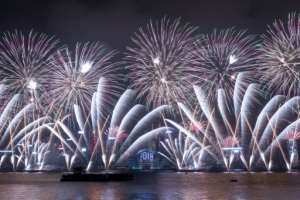 In Cologne itself, 1,400 police were mobilized, street lighting was improved and more video cameras were installed.

As the midnight chimes neared in western Europe, Hong Kong had already moved into 2018 with a stunning fireworks display over Victoria Harbor. Thousands watched as "shooting stars" were fired from the rooftops of skyscrapers during a musical spectacular.

Three hours earlier, Australia had rung in the New Year with a magnificent show of rainbow-colored fireworks cascading from Sydney Harbor Bridge.

Partygoers marked the nation's legalization of gay marriage, but under tight security. 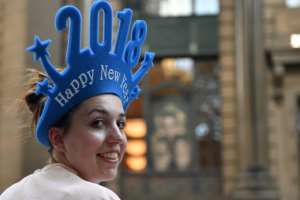 Earlier in December, one man was killed and more than a dozen hurt when a man plowed a car into a crowd of pedestrians in Melbourne.

In Africa, Cameroon President Paul Biya used the occasion to remind his citizens of their "duty" to "maintain republican order" as well as "social peace and national unity" amid unrest in the country's Anglophone regions.

In a year-end speech, Gabon's President Ali Bongo vowed "radical change in governance" for the country where around a third of the population lives below the poverty line.

IS's defeat in Iraq and Syria was one of the year's major stories in 2017, but jihadists remain a threat.

Donald Trump stole the news spotlight after making his debut as US President last January, with his "America first" policies and a bombastic personal style that has shaken up international diplomacy. 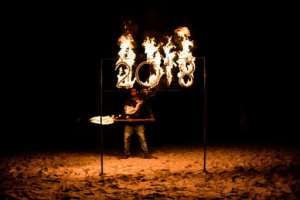 Revellers celebrate New Year on the beach in Zanzibar, Tanzania

"We are MAKING AMERICA GREAT AGAIN, and much faster than anyone thought possible!" Trump said in a tweet to close out the year.

Political and diplomatic earthquakes set to rumble into 2018 include the Middle East crisis between Saudi Arabia and its allies against Qatar, and the humanitarian disaster in Yemen.

In Europe, further talks on Brexit will help shape the region's future trade relationship while Russia is set to host the football World Cup amid frictions with the West.