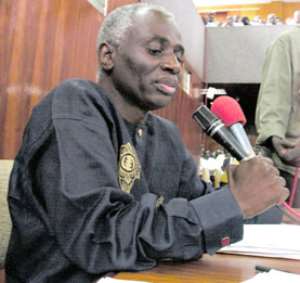 Counsel for Tsatsu, Prof. E.V.O. Dankwah reminded the trial Judge, Mrs Justice Henrietta Abban, Appeals Court Judge sitting on the case as a High Court Judge that she could be cited for contempt, if she went ahead to try his client.

Tsatsu was expected to open his defence when the case was called. The accused person is also charged on four counts of causing financial loss and intentionally misapplying funds totalling 2.345 billion cedis, property of the State

The offence, according to State Attorney prosecuting, is contrary to Section 1(2) of the Public Property Protection Decree 1977 (SMCD140). Tsatsu has pleaded not guilty to the charges and Mrs Justice Abban has granted him a 700 million-cedi self-recognisance bail.

Prof. Dankwah, who appeared with Major Rowland S. Agbenato (rtd), told the Court that they were asked to go to the automated court. Not satisfied with the statement, the Judge asked: "Were you not asked to come to Fast Track Court? Why did you come hear?" Counsel replied that they were before Her Lordship in the interest of justice.

Prof. Dankwah contended that he was not served with the necessary documents on the trial and that for his appearance before the Fast Track Court.

Counsel stated that Rule 81 of the Supreme Court (SC) Rule provides that on final determination of appeal, the Registrar shall give 16 days notice, but this was not applied.

He noted that this rule was not applied and that "if there is no compliance of this rule, what the High Court does is to quash the charge".

Counsel disclosed at the Court that he had filed a motion seeking among other things an interim injunction.

By this, he stressed, that the Attorney - General (A-G) had filed appearance for himself and the Chief Justice (CJ) in that case. He averred that it would be in contempt of court for the A-G to appear before the Judge to proceed with the case.

Prof. Dankwah contended that equally, it would be in contempt of court if the CJ, who was responsible for the administration of the Judiciary and the Judicial Service, sought to have this case heard, when there were such pending proceedings.

"My Lord it is my most painful duty to say Her Lordship herself can be cited for contempt if you proceed with this case."

Prof Dankwah said; "if this case were to proceed before the hearing of our motion and determination of our suit, it would not be the Executive which would be interfering with the functions of the court but the Chief Legal Officer and the adviser who is the A-G, and the CJ who is the head of the Judiciary and 'Your Lordship, herself' who would be interfering with the administration of justice in our country."

The Director of Public Prosecution (DPP), Mr Osafo Sampong, who appeared with Mr Augustines Obour, refuted the submissions made by Counsel. He stated: "My Lord I would like to submit that this is abuse of the judicial process."

He said the accused person could not hide behind a mere formality and say he was not served with the necessary documents. Mr Osafo Sampong stated that the Court was also served with a copy of the ruling that he should go back to open his defence.

"I will submit that all these are attempts to frustrate this Court and that the Court must resist them."

"Some of the quotations he cited to buttress his points have no relevance here," he said.

Mr Sampong said: "This matter has travelled all the way and the case has been reviewed. I will urge Her Lordship to proceed with the case."

He argued that Counsel's submissions were without merit and that a Supreme Court's decision could not be reversed by a High Court. Tsikata was to have opened his defence in the case on Tuesday, as a result of the dismissal of his appeal filed at the Appeals Court, challenging the FTC's rejection of a submission of no case.

In March 2003, the FTC overruled the submission of no case filed by Tsatsu and ordered that he should open his defence in the case. Tsatsu then filed an appeal at the Appeals Court in November 2004, which was dismissed on the grounds that it lacked merit and, therefore, ordered him to go back to the FTC to open his defence.

He filed an appeal to challenge the Appeals Court's ruling at the Supreme Court and this was also overruled.

The accused then proceeded to the Supreme Court for a review. Hearing continues on July 25.